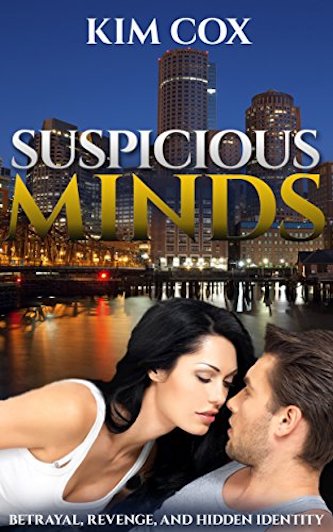 The storyline was intriguing and the suspense was palpable.

Natalie loves her father and yearns for his approval.

Ryan sets out to avenge his sister’s death, even if it means using Natalie to do it.

In the city of Boston lies a story of betrayal, revenge, and hidden identity.

Ryan poses as Thomas Randolph to get a position at the Southard firm.

When Natalie witnesses her father meeting with a well-known crime boss, she becomes suspicious of him. Ryan offers his help. Can she save the family business from DeMarco?

After her father is killed, they’re forced to run for their lives. But, will they live long enough for their hearts to heal once everything is revealed?

If you love romance with edge-of-your-seat mystery, Suspicious Minds is for you.

SUSPICIOUS MINDS by Kim Cox is a fun and suspenseful read. Ryan Donatelli is out to avenge his sister’s death at the hands of a well-known crime boss, while Natalie Southard is trying to keep her family’s company out of that crime boss’s hands.

When Natalie’s father is murdered, she and Ryan have to work together to achieve their goals, while trying to resist the growing attraction between them. Cox writes a thrilling story that keeps you turning the pages until “The End.”

This was a quick, fun read. The characters were likable and easy to root for. I appreciated how the main character, Natalie, a strong independent woman, was fighting her way out of her sheltered, only-child upbringing. The storyline was intriguing and the suspense was palpable. I thought it was interesting how we met the two main characters.

Typically, when there’s “undercover work” in a book like this, the audience is introduced to the situation before the main characters encounter one-another. In this story, the characters got the jump on us! They had already begun forming a relationship, which helped to move the story along at a fast clip. I enjoyed the relationship between Natalie and Ryan, too.

I found myself yelling out loud, “Just TELL her!” and “Just TRUST him!”…always fun to earn sideways glances from my kids.

Ryan Donatelli is a reporter who fabricates a new identity for himself when his sister, Shelley, is murdered. Prior to her death, Shelley and Ryan worked as a team; Shelley would bring down the criminals in her role, as FBI agent and Ryan would write their story. In her last assignment, Shelley had been undercover within a brokerage firm to locate evidence against Sam Southard and Crime Boss, Nick Demarco. It was during this time she was murdered, and Ryan decided he would go undercover to find the killer, doing whatever was necessary to find evidence against Southard, including manipulating his daughter Natalie, and using her in whatever way necessary.

Natalie Southard appears as a strong, confident woman who has her own doubts about her father’s business relationship with Demarco. She has chosen to violate company policy, and enlisted a friend’s friend, to browse through her father’s office to find evidence of this manipulative relationship. It is during this time the reader is introduced to Natalie and Tom as a couple for the first time, and to the dynamics at play between them.

Natalie and Tom are as suspicious of one another as they are of her father and Demarco. While they progress to trusting each other enough to work together, although Natalie believes Tom is lying to her, they continue to develop their evolving relationship from lust to passion to love. It is this mission to find the truth that casts a shadow on Natalie and Tom’s relationship.

Suspicious Minds is an intriguing read, providing the reader with several plots, which add to the complexity of the story. The characters are interesting and while not quite three-dimensional, an exciting story awaits as love and trust are explored, as well as betrayal and familial connections. It is this very premise that there are many layers to individuals, and family may never be who they appear to be, which is so fascinating about this book.