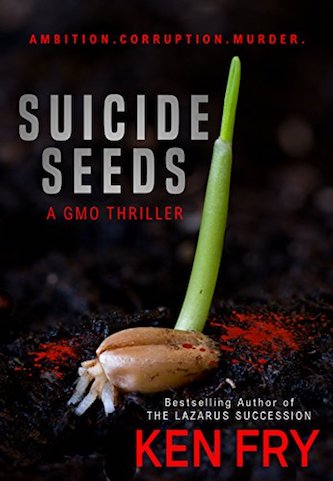 Fry creates a sympathetic protagonist and villains you love to hate. An old-school, classic thriller.

The fate of The Gambia, and maybe the rest of the world, rests on the shoulders of an ambitious man. Will he give up his dreams to do the right thing? Or will that cup of rice be your last?

Lloyd Olsen, a top executive of NewCrop, a western producer of genetically engineered (GE) seeds, is sent to the Gambia to head the company’s operation. The company has developed a new strain of rice, GRX, which promised to end the famine in West Africa. Olsen leaves everything behind for the promise of a CEO position.

Little did he know that the supposed “Holy Grail of Biotechnology” is a non-seeding, nightmare crop… dubbed the Suicide Seed.
A seed that could feed the hungry millions…
But a seed that kills itself and all other natural seeds in its proximity.
Giving NewCrop full control of West Africa’s agricultural supply.

Olsen discovers NewCrop’s real agenda when his life and those of the people he cares about is threatened by a fanatic hired by a corrupt government official in The Gambia to protect the contract. The body count starts piling up.

He must decide… join the conspiracy, or give up his dreams and fight? 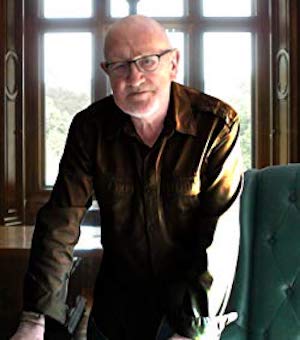 Hardly a week passes somewhere in the world that there isn’t a debate on the issue of genetically modified crops. The pros and cons of both sides are equally compelling. It has always been an issue that has fascinated me. That fascination coalesced with my frequent stays in Africa.

West Africa has seen a drop in its annual rainfall over the last twenty years of thirty per cent. Clearly, that presents an agricultural dilemma. It is clear to see when countries whose main crops are rice, peanuts and bananas are compelled to begin importing these items to satisfy local demands. Previously that wasn’t a problem.

What disturbed not only me but activists around the globe, was what certain biotech companies were up to, as they began to promote their drought resistant and health giving varieties of seeds as the elixir of the human race. To further these ends, massive amounts of corporate corruption took root and flourished and contravened all conventions and were downright criminal. Huge international court cases followed and companies named and shamed.

Reports also began to leak out that GM crops were being developed so as to cause all other natural seeds to wither and die before they themselves expired… hence the title of the book. Farmers, to survive, would have no alternative but to purchase seeds from the biotech companies, year in and year out, forever.

While in Africa, I remember watching two emaciated children getting into a terrible brawl over finding and trying to eat a small orange found in a gutter. That struck home with some force.

I developed a small life and a love of the place. Such beautiful people… such terrible corruption, some of which I witnessed and others I was told of.

Suicide Seeds is a work of fiction but is NOT too far away from what happened. Some characters are totally fictitious, others not, there are those who are dear to my heart. In some way, they appear in this story. The dogs are for real and so is Beach Dog. Bless him.

Suicide Seeds is set in Gambia, West Africa where NewCrop is planning to expand its genetically modified (GM) crop development program. In a surrounding that is rife with bribery and corruption, the author’s extensive knowledge of Gambia is invaluable in bringing the characters and environment to life.

There is never a chance to get bored with this fast-paced and action-packed novel. A word of caution though, there are some scenes of stark violence but what can you expect when seedy and greedy individuals face the threat of public exposure.

The book raises pertinent questions about the ethics of GM crop farming which has increased rapidly over the years in many developing countries.

I enjoyed reading the book very much and I feel that it has all the makings of a bestseller. I cannot wait to read more of Ken Fry’s writings!

Lloyd Olson ventures from the UK to the Gambia to oversee a major project for his GMO-selling employer. He finds a lot more danger (and love) than he expected. Fry creates a sympathetic protagonist and villains you love to hate. He does a good job of presenting GMO crops fairly, acknowledging the positive aspects and not shying away from the negative.

This suspense novel turns the disturbing sexual violence level up to eleven in places, just so you’re aware. That isn’t to my personal taste, but I understand that it is often part of the genre, and it certainly effectively conveys the evil of the villains and the fear they engender.

The writing style is old school classic thriller. No modern snarky dialogue here. If you have enjoyed Fry’s other work, you will likely enjoy this one.