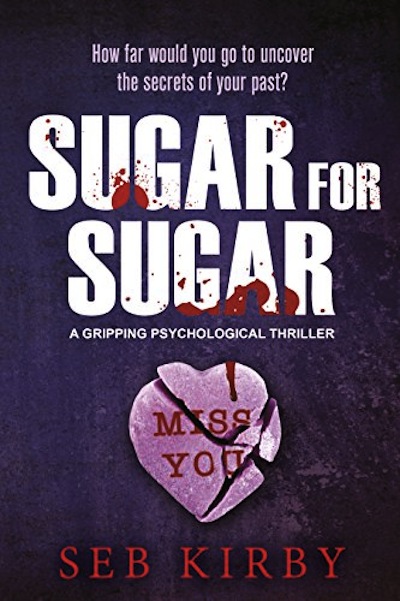 How far would you go to uncover the secrets of your past?
Issy Cunningham has made a new life for herself but that’s all about to come crashing down.

If only she could recall what happened that Valentine’s Eve, she would be able to tell the police what really took place.

But those memories won’t come because there’s too much in the past that troubles her.

How can she set the record straight when her past won’t let her be?

I greatly enjoy reading books by Seb Kirby. Check out my reviews of Take No More and Each Day I Wake. If you enjoy psychological suspense, do consider this author, starting with this book, which I read in one day… It is fantastic!

It is difficult to imagine losing parts or all of your memory. As we grow older, many of us lose our thoughts such as what we were looking for–it may take a while but we usually do remember. But Issy Cunningham had become unable to remember her recent and immediate memories. She would ask questions such as to “Where am I?” but would then immediately forget the answer so that she would ask over and over…

But this was not just a medical issue that resulted from her being assaulted… She remembered she was divorced and in her early dreams she remembered loving her husband….

And she certainly didn’t remember, or even know, that her boss had been murdered the same night of her assault…

The police had already found from security cameras that she had been with him that night…but she remembered nothing… The only fortunate thing for Issy, which in her condition, was that her boss, who had been acting on an interim basis, had been so cruel as a boss–telling everybody that he would get things in good shape while he was in charge–that he had made everybody hate him at work…

Detective Inspector Stephen Ives, a 25-year-veteran still grieves for each individual who has been killed during criminal activities, not understanding the willingness for humans to consider life so lightly… He has a personal bias against “creatives” who work in advertising, so he struggles hard not to allow his feelings to become part of this investigation. But as a meticulous officer, he is soon finding evidence that supports Issy being involved…

Was the rape assault too much for her to deal with… But why, then, did they find evidence in her office that would lead to an assumption of pre-planning?!

There are other persons of interest as well and the investigation becomes more and more complicated, while at the same time, Issy has more and more flashbacks that is filling in the blanks of her memory… and the memory of her losses bring back all the heartbreak she had faced those many years again…But at least she now knew why she was divorced.

Because of the specific type of loss she was experiencing, she began to make notes as a reference to ensure she didn’t lose what memories she’d already regained… So far… I find the phone and stare at the notes there.

Why did Colin need my help?

Mary is a good friend.

I should have trusted my mother.

John, how did I ever lose you?

Mike is dead. Why do I feel so guilty?

How I love you, Kelly.

The ending was certainly a surprise and could not have been foreseen. Yes, there were several clues, but not enough to even guess at what happened! And, is that what makes a totally satisfying closure…Well, almost… I had to wonder if there would be a followup to this story…Surely, there had to be something good come out of this…that’s my opinion; my hope!