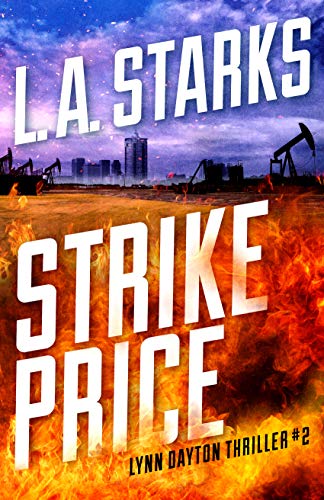 Starks has knit together the early twentieth century history of oil-rich Oklahoma with the more recent history of the world oil industry into a very interesting puzzle.

When several people involved in bidding for an oil refinery are murdered, the situation becomes far more than a billion-dollar business deal.

A self-made woman in the oil industry, Lynn Dayton fights to save lives when escalating attacks reveal a hired assassin’s plan to disrupt energy trade, wreck world economies, and draw another global power into dangerous confrontation with the United States.

Lynn Dayton and Cherokee tribal executive Jesse Drum must learn to trust each other so they can find and stop the killers.

Can sobering up really be fatal?

How have so many of the deaths been made to appear accidental?

Strike Price is set in places that I know well! The non-stop connections of people, places and themes to each other kept me reading, as I was curious to see what secrets the author has to tell that I should know!

Of course living in many of the same US oil company towns where so much of this novel is set has given me an acquaintance with the lifestyles portrayed here… It is quite interesting to see such familiar locales turned into a setting for drama, adventure, and all sorts of difficulties for various characters in the book.

The author’s descriptions of the Osage countryside, the Tulsa bungalows, the casinos, the oil company employees and their travels all over the world are quite apt and I can picture the people easily!

The author has knit together the early twentieth century history of oil-rich Oklahoma with the more recent history of the world oil industry into a very interesting puzzle that is very satisfying!

L.A. Starks is a super achiever and a runner – so is her character Lynn Dayton. Lynn is going through a stressful period in her life as she struggles to let go of her dying father while planning a new life, complete with young children.

Then, there is the job. Lynn is a senior executive in an energy company battling sexism, the constant need to be on point, plus a crazy travel agenda. It’s a tough business that takes no prisoners. Add in murder, mayhem, and a cross border conspiracy and that’s enough to flatten the average human.

So I admire her determination as much as her eventual recognition that the one area in her life she could control – the personal – needed to pare down for her own sanity.

Starks draws characters who pull us in, even the minor ones, and who we are sad to let go (people get knocked off pretty frequently). I particularly enjoyed how she interwove the Cherokee Nation’s history and culture.

However the very intricate detailing of energy operations got a bit too much midway and I began skating past these to follow the real storyline.

As a veteran of a long career in the international oil and gas sector, it was clear to me within the first couple of chapters of L.A. Starks’s masterful Strike Price that the author has deep and personal familiarity with the industry herself, both domestic and foreign. Too often, writers of fiction stoop to unconvincing caricature and cardboard insights when it comes to petroleum and the people who find it and it produce it.

In a marvelous series of scenes set in Paris with a high-ranking Saudi ARAMCO negotiator, she gets the nuances of such confabs down tone-perfect. Few writers can do that because they have to try to imagine life inside a big oil and gas company, whereas Starks has obviously been there and done that in the real world. That background helps her.

You will find no overly-simple stereotypes in Starks’s writing about oil companies being nefarious. In my own experience, oil and gas executives are at least as honest and financially scrupulous as other business executives in America, and it gets tiresome to see them all depiicted as cheap flim-flam con men like J. R. Ewing.

And let’s not forget that without Exxon and Chevron we would all be riding bicycles to work!