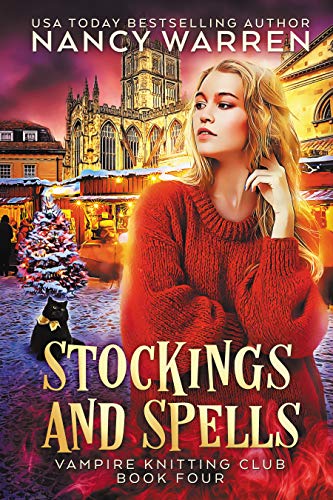 A wonderful, spooky good Christmas read sure to keep you guessing till the end.

But when a sales clerk in another booth is found strangled with one of the stockings, Lucy Swift and her undead detectives are on the case, determined to find out who would do such a terrible thing. And why.

In the meantime, Lucy’s working hard at her spell book, learning to be a witch, with the help of her black cat familiar and her new assistant. Meritanum is a three-thousand-year-old Egyptian witch and she’s having trouble with some of the concepts of modern life, such as traffic, Smart Phones and anything powered by electricity.

Life at Cardinal Woolsey’s knitting shop, in Oxford, England, is as colorful as the most garish Christmas sweater.

STOCKINGS AND SPELLS is a standalone read with a VERY satisfying ending. Lucy, the owner of Cardinal Woodley’s knit shop, inherited from her Gran in Oxford, England is at it again. Lucy seems to always be in the middle of some adventure every time someone is found murdered.

I LOVED this story. The whole time I was reading my stomach was rolling waiting to see what happens next and wanting them to get on with so I could find out who did it!! It is a great read, I think the best so far for this series.

Lucy makes a new friend at the local Christmas market. The market is pretty much like the craft fairs we have around Christmas time. The young woman is clearly keeping a secret. She is not really open and at peace. Unfortunately, before they can become very close the woman is found in her booth where she was strangled.

Lucy goes into PI mode and is determined to find out who tried to kill her friend and why. The plot thickens as an ex-boyfriend puts in an appearance and he too acts rather strange. The plot thickens, even more, when a local author, very famous for the fantasy novels he put out almost twenty years ago, (reminds you of Harry Potter) comes into the story.

This story kept me riveted. I could not put it down. Nancy has done herself proud. This is a truly great story with a very satisfactory end. HEA in a way. It is not a love story but there are a couple of very interesting males that have shown an interest in Lucy. One is a vampire, Rafe, so we don’t know how far that can go.

He is hundreds of years old and Lucy is human and 27. The other is a detective for the local police. Ian is definitely interested but he moves rather slow!! Could be a British thing. Lucy has a big adventure in all the books. They can be read as standalone or read the series starting with book one to see how it all began.

I definitely recommend all the books in this series. A very good series.

Nancy Warren is back, with her latest entry in her Cozy Mystery series, the Vampire Knitting Club.
Neophyte witch Lucy is still working hard on getting a handle on her witchy powers when her vampire buds announce to her that they want to take part in the annual Oxford Christmas craft fair…..And guess who’s going to be their go-between?

As if she didn’t have enough on her plate trying to deal with the day to day of running Cardinal Woolsey’s and keeping hold of an assistant who didn’t turn out to be a complete psychopath. But she’s going to manage Timeless Treasures as best she can, without getting drawn into….Oh, no!

The sweet girl running the bath and body products stall across from her was just strangled. She’s still alive, but will she stay that way? And who the heck could have done such a dastardly deed? Was it her nutty boyfriend that she just broke up with? Could it possibly be an ex-colleague of her father’s, who insists her father plagiarized his work many years ago? Could it maybe have actually been her father, in the throes of a drunken rage?

Join Lucy, Rafe and the rest of the gang as they race to discover who tried to murder Lucy’s new friend Gamma before they return and finish the job! A wonderful, spooky good Christmas read sure to keep you guessing till the end.

Please click HERE to find Stockings And Spells on Amazon.