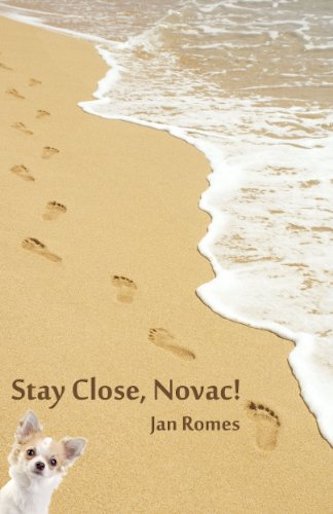 This is a fun, upbeat, romance story and mingled throughout it is comedy, facetiousness, intrigue, and mystery.

Jessi Novac leads the quiet life of a romance author until someone leaves a series of explicit notes under her windshield wipers and heavy breathing on her answering machine.

Until NYPD can track down the culprit who’s trying to scare the bejesus out of her, Jessi hides out at her grandmother’s beach house in Myrtle Beach where she hopes to get her bearings. Instead, her life takes an even bigger tilt toward crazy when she meets her clumsy neighbor.

She’s suspicious of Ian Alexander and attracted to him at the same time. Their relationship becomes a calamity of errors until strange things start happening at the beach house. Jessi clings to Ian for protection but soon discovers her heart may be in more danger than her life.

At greater risk than her life, is Jessi’s affection for Ian. She had relied on him for safety when weird situations took place at the beach house. Not long before that their liaison had amounted to a bunch of mishaps.

For some reason Jessi finds herself enticed with Ian as well as having her guard up toward him. Her life became chaotic when she first met the awkward guy, Ian who resided only next door to her. She takes refuge at her grandma’s beach house due to some weirdo frightening her to the point where she didn’t want him to find her. Then the police find him.

All Jessi was doing was living a serene life as a romance author until the notes were stuffed under the wipers of her car. First off, I want to go the beach house Jan Romes writes about; the way she describes it is so inviting.

This is a fun, upbeat, romance story and mingled throughout it is comedy, facetiousness, intrigue, and mystery. Jan has a sense of humor and it shines through her writing. With so much heavy upheaval in our world, this narrative is a breath of fresh air.

Bravo to a superb read!

Stay Close, Novac is a light, sunny romance with a touch of comedy featuring two characters surrounded by mishaps and mayhem. Jessi Novac is a smart and snappy romance novelist who flees New York City after receiving menacing notes from a stalker.

Jessi retreats to the peaceful shores of South Carolina to write, recuperate, and hideout. Constant paranoia makes her skittish around strangers until she falls in love with the good-looking hunk, Ian, who lives next door. Emerging from a bad relationship, Ian’s mission is to rage war on the she-devils of the world.

But Jesse’s simple beauty, slapstick charm, and need for protection reel him in. The relationship bumps along, checking out mysterious bumps in the night, until Jessi discovers that Ian has unfinished business with his wife, Rachel. Taken aback, she flies away to spend time with her family in France.

Jessi’s need for Ian’s steady hand becomes apparent as she faces the problems surrounding her parents’ on again, off again, relationship. In the meantime, Ian realizes that Jesse Novac needs him, that she isn’t a she-devil at all, and that she’s a woman with a heart that’s big enough to fill the void in his.

Jessi Novac is a romance writer in NYC, someone is scaring the life out of her, leaving nasty notes on her windshield and calling her home breathing heavy. She decides to leave the city until this person is caught, she heads to her grandmother’s cottage in Myrtle beach.

She arrives very late due to plane changes. She hears a loud banging and a moan, she gets up and is ready to flip out on this person, it’s too early for this noise. Next door she finds a handsome handyman had fallen off a ladder, Ian Alexander is fixing his uncles porch.

Jessi starts flipping out on him until she sees he’s hurt. Normally she’d jump right in to help but, because she’s not trusting anyone at the moment, she questions him first. Still not trusting him she helps him and tells him to quiet it down. Jessi can’t stop thinking about how delicious Ian looked, she doesn’t want to think this way, she doesn’t trust him.

Things start getting scary around her cottage and she finds herself running to Ian for safety. Are these things in her mind being blown up because of her imagination? Can she trust Ian? Will her life ever get back to normal? Read and find out, it’s a fun read.