Daily Review: We Were Sisters by Wendy Clarke 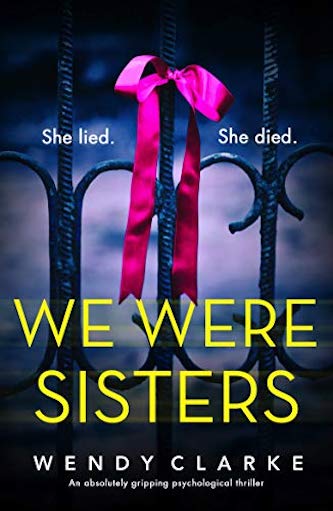 This is an intriguing tale that is filled with suspense, secrets, lies and betrayal that keeps you on the edge of your seat.

I turn to where I left my baby in his pushchair and pull up short. With a racing heart, I look around wildly, fear gripping my stomach. I only looked away for a moment. The pushchair and my baby are gone.

Kelly is taking her twin daughters to their first day of school, ushering them into the classroom, her heart breaking to think they might not need her any more, when she turns around and sees that her newborn baby is gone.

As a desperate search ensues, baby Noah is quickly found – parked in front of a different classroom. But when Kelly reaches forward to comfort him, she finds something tucked beside his blanket.

A locket that belonged to her sister Freya.

A locket Kelly hasn’t seen since the day Freya died.

And then Kelly’s perfectly-ordered life begins to unravel…

We Were Sisters is a heart-pounding suspense thriller that will grip you until the very last page. Fans of Behind Closed Doors, Gone Girl and The Girl on the Train won’t be able to stop reading this incredible book.

Kelly is walking her twin daughters to their first day of school. It is not a pleasant experience. For one thing Kelly has OCD so the walk is wrought with problems – such as counting to a certain number while a light changes from red to green. Meanwhile, one twin is over-exuberant about her first day, while the other twin is terrified, thus leaving Kelly’s nerves extra raw. Along for the walk is Kelly’s baby Noah.

Kelly parks Noah’s pram near the door to hand over her daughters to their teacher. After only turning her back for a moment, she realizes Noah is gone. She flies into a panic, but then notices his pram a few classrooms down. When she reaches in to comfort Noah, she grasps a locket. The locket belonged to her sister Freya. How could this be? Freya died years ago and Kelly has never seen the locket since.

With Kelly already being frazzled, Noah’s pram apparently being moved, and the locket being discovered makes matters far worse for her. However, despite having a good relationship with her husband, Kelly feels she can share her fears and concerns with him. Instead she tries to focus on caring for the baby all while helping the girls adjust to school.

This story goes back and forth from past to present. Kelly had a very unhappy childhood, and was always seeking the love and approval of her parents. Meanwhile, her mother seemed always looking for something, or someone, and thus Kelly had various foster siblings when she was a child. Kelly really hoped that Freya, when she came into her home, would be her real sister. Why then, after leaving home many years before, does Kelly suddenly find Freya’s locket in Noah’s pram?

Things become rather sinister in this story. What happened with the locket was only the start of rather terrifying things for Kelly and her family. This was indeed a thrilling book, one that I read in one sitting. I was eager to know what the mystery was with Freya and also wanted to know the depths of Kelly’s emotional problems and whether or not they would impact her role as a wife or a mother.

Wendy Clarke did a fantastic job holding my attention from the very first page. I loved the mix of family drama and mystery. The inclusion of mental illness was handled gingerly and respectfully..The conclusion was thrilling, thus rounding out a very well-written story.

2 for 2! Wendy has done it again! After reading Wendy’s debut in the psychological thriller genre What She Saw, I was blown away by it and for We Were Sisters, she has blown me away again! Wendy absolutely nails it and is now not just a rising star in this genre, she is now a star of this genre!

Right from the first chapter I was taken hostage and was not released until the final page. Wendy really excels in getting the readers attention right from the beginning and keeping you enthralled throughout. This is an intriguing tale that is filled with suspense, secrets, lies and betrayal that keeps you on the edge of your seat till the jaw dropping conclusion. Also I cannot go without mentioning the cover of this book. It is so striking and lets off an ominous vibe that compliments the story well.

Wendy has created a tightly woven well researched story, that takes the reader on an emotional rollercoaster. It is told from the perspective of main character Kelly and uses the present to the past aspect extremely well throughout.

We are given a thorough insight into Kelly’s character and how her relationship with her parents as well as her foster sister Freya, have shaped her into the person she is in the present. The blurb tells enough of what the story is about that I don’t want to say anymore on this as I don’t want to reveal any spoilers.

The range of characters for me, we’re both a mix of likeable and unlikable. I really resonated with Kelly and felt sympathy for her and was rooting for her throughout. Her husband Mitch on the other hand, frustrated me to no end with his lack of empathy towards his wife’s struggles and her mother was just a horrible human being with how she treated her.

With Freya, I instantly had a feeling of unease with her. in saying that I did feel sympathy towards her as I can’t even begin to imagine what it would feel like going from one foster family to another and the effects that would have on you mentally. She has been written perfectly to make me feel both of these conflicting emotions and definitely comes to life within the pages.

I really love Wendy’s writing style. With the short snappy chapters, everything just flows effortlessly with one chapter turning into one more, then one more until there was no more left and even though I was disappointed that the story was over, I did walk away feeling satisfied that I had just read another addictive first class 5 star read!!

We have definitely been spoiled with two books from Wendy this year and I for one cannot wait to see what she will have in store for us next.

Please click HERE to find We Were Sisters on Amazon.