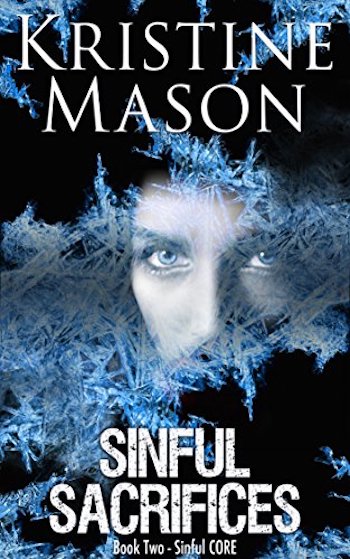 An unknown subject is pulling the strings in a game of greed and revenge with the lives of fifteen teenagers.

Some sacrifices lead to murder…

A ski trip turns deadly when a bus carrying boys from an elite high school is hijacked and driven to an old abandoned amusement park. With a frozen lake on one side, acres of forest on the other, and up against a blizzard and sub-zero temperatures, the teens are trapped and at the mercy of their kidnappers. They have less than forty-eight hours to escape before the gunmen make good on their threats and begin killing them…one by one.

Chase Sawyer, agent for the criminal investigative firm, CORE, was a badass Crisis Negotiator with the FBI until a hostage situation resulted in the deaths of innocents. In the fallout, he left the Bureau, left the woman he loved, and left town. When a ransom is demanded for the release of fifteen kidnapped teens, Chase returns to Cleveland to work with the FBI and is forced to deal with past mistakes, along with the woman who haunts his dreams.

FBI Agent Summer Raines wonders why she still loves Chase. Before their breakup she’d been questioning their relationship. The man never could commit, and after becoming a crisis negotiator, had turned controlling and distant. Yet, five months ago, when he’d been in Cleveland for an assignment, she’d let him into her house and bed, only to be left brokenhearted once again. Now he’s back and about to get a huge surprise…she’s pregnant with a child he never wanted.

An unknown subject is pulling the strings in a game of greed and revenge with the lives of fifteen teenagers. The players he has pulling off his twisted game are lacking moral compasses and the body count climbs pretty high.

Core Agent Chase Sawyer is sent to assist the FBI Cleveland Division on the case as one of the kidnapped kids is a US Senator’s grandson. Chase used to work for the FBI as a crisis negotiator. During that time he dated and was in love with FBI agent Summer Raines.

His guilt over how he lost a partner and that it also resulted in the killing of a teenager made him so overwhelmed with nightmares and self doubt about himself he walked away from both the FBI and Summer. Coming back to Cleveland opens up a lot of old wounds and demon and along with that having to face Summer again as she is one of the leads on the kidnapping case.

I liked how the roles were sorta flipped in this book. Summer is a strong confident FBI agent and woman. She knew Chase had commitment issues while they were together – even before the tragedy that changed him even more – but afterwards she knew he didn’t think he was good enough for her and let him go when he ran. She still loves him but doesn’t let his rejection poison her mind.

She went on to get a promotion to running her own team – even with getting the surprise of her life – an unplanned pregnancy from a one night visit from Chase five months ago. I love a woman who can say I love you but I don’t need you. Someone needed to make Chase get his head out of his ass and Summer’s shocking news and her laying the “we don’t need you” gauntlet down finally got through to him..

Now the kidnapping of the fifteen boys.. Two acts to this – the before they are rescued and the after.. Author throws some red herrings in and they are pretty good… The first act was suspenseful but the ending of the second act will blow your mind..

Not going to say much on this but Ian Ian Ian – you are a meddler.. Always enjoy a CORE book and look forward to many more..

Kristine Mason starts Sinful Sacrifices out with a BANG, but that’s no surprise. She manages to hook me from beginning to end in all her books. She loves to share her blood and guts imagination.

Brenna managed to get a quick text off before the kidnappers confiscated their phones. Kristine’s bleak description of the rundown park they would hide in mirrored his feelings of despair. I lived in Rochester NY near Sea Breeze Water Park, so this was easy to visualize, looking other worldly, alien and forlorn. The danger is very real and escape is on their minds…all the time.

When it’s discovered a Senator’s son has been taken, CORE is called in and Chase makes his appearance. Also, the Senator insists the FBI be in on it and we meet Summer. Kristine likes her hotties and simmering romance with flawed characters and I am always eager to see what she puts them through.

The push and pull of romantic suspense is some of my favorite reading, after the initial thrills of whatever tragedy brought them together. Communication is one of the most difficult things to do and one of the most common problems in any relationship.

Strength is letting your shield down, showing your emotion, letting someone really know you. Men see it as more of a weakness…or are they truly from Mars and we will never understand them. I want Chase to put his big boy pants on, quit wallowing in denial and talk to Summer. How else can they heal the wounds of their breakup?

I love Chase’s cute attempt to ‘help’ Summer. But taking away her coffee…that can be hazardous to his health and considered cruel and unusual punishment. I too count on my coffee in the morning and I feel her frustration.

I laughed out loud when Summer gave herself the finger at her scowling face in the mirror.

I love the scene in the kitchen, him cooking her breakfast. Humor in the morning is a good thing…a great way to start the day.

Summer has a bad feeling, but I don’t see why. Is it just experience telling her she’s missing something? I do agree with Summer, because Kristine always has more than meets the eye going on. She can twist and turn a story with the best of them. Her writing makes me feel as if I am there, at times….with the kids in the ghostly run down park, with Summer and Chase as they struggle to come to terms.

The romance is complicated. Kristine Mason’s men have ways of slipping into your heart and never leaving.

She keeps the mystery of the leader alive making me use my powers of deduction to figure it out. A process of elimination, if you will, but it took me a long time to get there. Good luck trying to figure out the mastermind.

Her stories are never about just a murder or just a kidnapping. They are elaborate, detailed, filled with convoluted characters whose motivation is of the most twisted and dark kind.