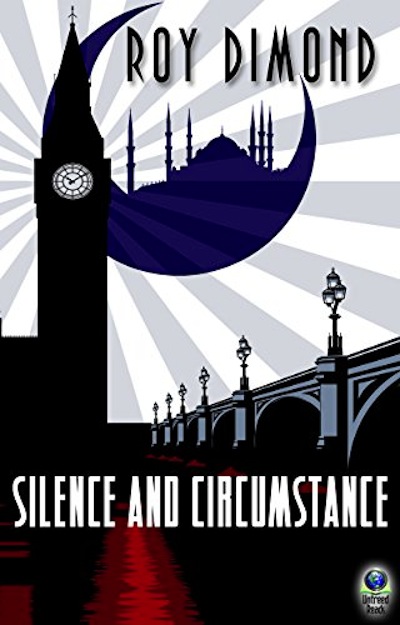 Unique, unexpected, suspenseful, SILENCE AND CIRCUMSTANCE will delight those who love historical fiction and mysteries.

For eleven days in December 1926, that was the question all of England was asking. Was she kidnapped, or possibly a pawn trapped in an international mystery? Or could she actually be the puppet-master, secretly manipulating an entire nation from behind her typewriter?

Did one of the most disciplined writing minds the world has ever known really just “black out,” only to somehow reappear eleven days later, feeble and disorientated at a spa hotel? And what really was written in her missing diary regarding those eleven mysterious days?

Through a weaving of facts and fiction, the adventure unfolds through the perspective of her governess, Charlotte “Carlo” Fisher. Having accepted the role of confidante to the great writer, and ignited by the receipt of a mysterious letter, Charlotte embarks on a sinister and harrowing quest.

In her exploits, Charlotte is aided by many of the famous and elite of the twentieth century. While Sir Arthur Conan Doyle and his protégé, Ian Fleming, speed towards Istanbul on the Orient Express in search of Agatha’s diary, Charlotte discovers clues that dispatch her to Berlin where she stumbles into a world gone mad.

Mysterious societies emerge from the shadows, and it appears something dark is rising…

Silence and Circumstance by Roy Dimond is not just a book, it is an experience. For anyone who loves the period between World Wars, and the great artists and writers of that period: this book is a real treat. The book speculates what happened during the eleven days that Agatha Christie went missing in 1926, and search that went on to find her.

Charlotte Fisher, nanny to Agatha’s daughter and her friend, is the narrator of the book. In the novel, we are introduced to a collection of artistic royalty from the period all trying to solve riddle of Agatha’s disappearance. John Steinbeck, Arthur Conan Doyle, Dashiell Hammett, Ernest Hemingway, to name just a few, all join the search which spans all of Europe, and of course, involves a ride on the Orient Express.

Charlotte’s voice seemed real and spot-on for the period, and we are pulled like her as innocents into Agatha’s disappearance and experience events as she does. We share her fear, astonishment, and confusion. We also get to see great authors and artists as people, not as the giants and cultural icons that they become later.

This book was a journey, almost an amusement park theme ride featuring the figures and events of late 1920s. The looming threat of another war was something you could feel throughout the novel. along with the desperation and urgency of the people trying to do something to stop it.
Silence and Circumstance will not disappoint anyone who loves this period in history, and also loves a good mystery. It is one of the best books I have read this year.

December 1926. The second World War brews in the not-so-distant future, threatening to wipe out all semblance of independent thought and imagination. And a motley assortment of artists, intellectuals, authors, and other like-minded individuals stand in the gap between the total annihilation of the crucial importance of words and thoughts to culture, and the preservation of the same.

When one of the leading intellectuals — none other than famed mystery writer Agatha Christie herself — vanishes, the others, including Sir Arthur Conan Doyle, John Steinbeck, Ernest Hemingway, Dorothy Sayers, and many others, fear foul play and leap immediately to solve her disappearance before it’s too late.

The mystery novel SILENCE AND CIRCUMSTANCE by Roy Dimond is a remarkable work of historical fiction based in fact and peopled with an unbelievably diverse cast of (for the most part) actual historical figures, such as the aforementioned, along with D.H. Lawrence, C.S. Lewis, J.R.R. Tolkien, Ian Fleming, and more.

The work is largely narrated in the first-person perspective of Agatha Christie’s daughter Rosalind’s governess, Charlotte Fisher, who finds herself unwittingly involved when a confidential errand for her employer turns into an adventure that spans eleven days of that same employer having gone missing entirely. Others of the more prominent intellectuals feature as perspective characters periodically throughout.

The amount of research that under-girds the mysterious goings-on in the novel is staggering, and author Dimond is to be commended for such substance and authenticity in rendering the historical characters who make up his work. Every so often, there is an occasional line of dialogue, internal thought, or descriptor that doesn’t really seem to belong, accurately, in the year 1926, but for the most part, the setting is richly devised.

Perhaps the most compelling aspect of the mystery, however, is in the incredible cast of characters, each with his or her own respective quirks, preferences, beliefs, and contributions to the forward momentum of the story. Widely read readers will recognize without hesitation the real-life authors and artists of some of their most beloved novels and paintings, in particular, though scientists and other intellectuals also feature as a matter of course.

Unique, unexpected, suspenseful, SILENCE AND CIRCUMSTANCE will delight those who love historical fiction, mysteries, other cultures, and timeless works of art.

Please click HERE to purchase Silence and Circumstance from Amazon.