Daily Review: Shifting in the Realms by Theresa Snyder 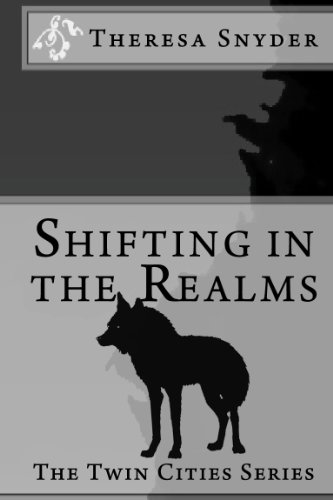 This is a sweet story with vamps, fire demons, and lots of other paranormal creatures so what’s not to love.

The Realms refers to a parallel dimension hidden between Minneapolis and St. Paul where creatures, humans think of as only mythical, roam free.

Cody is a shape shifter with some monumental problems that all started when he died. He’s escaped to The Realms from the midlands between Heaven and Hell only to find his best friend is potential food for the resident vampires, his girlfriend only loves him in his wolf form and her mother…well, that’s a whole other story.

It isn’t easy being Cody, but like a good wolf, he’ll do what he can to protect his pack even if it kills him. Wait … he’s already dead.

By Mindyg123 (Romance Authors That Rock)

Cody is a shape shifter, a wolf to be exact; he’s also dead, sort of. He’s stuck being 16 forever and since he’s technically dead he’s hiding in the Realm. His dad told him shape shifters don’t go to Heaven so he “beat feet” as he puts it from the Midlands, the place dead people wait for their judgment.

He’s made it to the Realm where he’s safe for now and meets a girl. Now go grab it to find out more you won’t be disappointed. This is a sweet story with vamps, fire demons, and lots of other paranormal creatures so what’s not to love.

Perfect for the 13 and over crowd.

The shape shifter is dead. Sort of.

Hiding in The Realm, Cody finds a life, er, unlife among the humans, vampires and… other beings living there.

Trapped as an adolescent by his death, he meets a girl.

You’ll have to read it to find out the rest.

Then come back and give it 5 stars. Because they don’t let you give it 6.

This is an extremely enjoyable and well-written story. Like a gourmet meal or a fine wine, it leaves you wanting more and satisfied at the same time.

I highly recommend this novella.

What a fun and quick read! Cody’s character is likable and developed fairly well in this short read. He is my favorite, not only because he’s the main character, but because he is sensitive, insecure, and strong all at the same time.

Having a crush on a girl, Cody turns into his wolf form, and it is adorable how he interacts with Simone (the girl he likes). From the way he enjoys a belly rub to the way he eats, Cody’s character can be seen through this furry animal.

The author does a nice job of developing The Realms. She takes the time to describe some of the creatures that live there, including a not-so-common supernatural being that you definitely don’t want to mess with (I won’t spoil the surprise!). I felt I was in Cody’s new world, and I appreciate the author in doing so.

In this well-written text, the only “issue” I had was I wanted more! The author’s writing style and unique tale are worth looking out for.

I would recommend this read to those who enjoy some supernatural in their reading and learning about a new world!

Please click HERE to find Shifting in the Realms on Amazon.