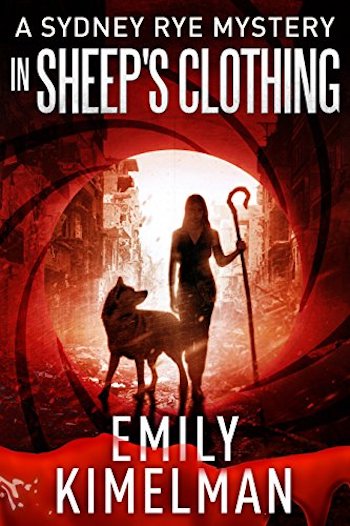 She does have her instincts, tenacity and the voice that whispers; your daughter is alive, don’t give up.

All that’s left of her is a depression in the dirt and a pool of blood.

Robert Maxim is ruthless, powerful, and determined to find her.

April Madden is a preacher’s wife, and Sydney’s mother. She’s willing to risk everything…her sobriety, her marriage, even her faith, to hunt for her daughter.

But they can’t find Sydney Rye if she doesn’t want to be found.

ISIS has a new enemy, a ghost haunting their territory, infecting their flock with radical ideals. They will do anything to capture her. Their reign depends on this new prophet’s destruction.

Graffiti of a woman’s silhouette, set in a snarling wolf’s profile, appears in ISIS-controlled territory convincing Robert Maxim that Sydney Rye is alive. When women in the area begin attacking their abusers, he suspects Sydney is responsible. But Robert can’t believe she is involved after rumors claim a prophet, a weapon of God, has risen to free women from oppression.

April Madden hears the devil whispering to her; just one little cocktail to dull the pain. Instead of picking up a glass, she throws herself into a quest; track down her missing daughter, her only surviving child, and make amends. Traveling into the Islamic State is fraught with danger and thick with obstacles. April doesn’t have her daughter’s combat training or Blue, Sydney’s loyal, giant dog.

But she does have her instincts, tenacity and the voice that whispers; your daughter is alive, don’t give up.

It is not often that an author has the temerity to let the secondary characters in a series step to the fore and carry a book, but that is what Emily Kimelman has done this book. Sidney Rye herein is secondary, a catalyst for those who have both loved and hated her. Her disappearance enflames the passions of those who care for her enough to set them on life altering journeys to try to find her and help her.

Against this backdrop we see an anti-ISIS movement being born and nurtured by the blood and belief of the maligned and abused women finally rising to demand equal value. We are also made aware of the shrouded woman who has found Sydney, healed her, and controlled her to use as a symbol of the new prophet. Fascinating stuff, very well executed, well written, and exciting enough to make us wish for more. Good reading!

Another Excellent story in the Sydney Rye series! Ms. Kimelman sure can weave a story that hooks you and keeps you dancing on the line. Such a serious subject but, wow, the way she weaves the intricate details is amazing. Love the artist and other new characters.

Bobby is back, as is Mulberry, and of course Blue. Blue has some pretty awesome friends that have joined him and Sydney. Was quite surprised at the role that April, Sydney’s mother, played in this book and was happy for her role.

This is the perfect sequel to The Girl With The Gun, Number Eight, which deals with ISIS and degradation of women as slaves. Handled very well for that type of subject and is definitely worth the read. Waiting for the next in this series with bated breath.

Whew…that would be me releasing that breath I’ve been holding while finishing up this book! Good golly, that was intense. I tried to read it slow but the fast paced action just didn’t allow for that. I could feel my own adrenaline pumping getting caught up in this story.

I was on the edge of my seat wondering what was happening next. It’s insane the way Emily can submerse you into the story and make you feel the characters emotions.

I loved, I laughed, I cried, I cursed with clenched fists. Seriously, I had to put it down and walk away for a moment because the emotions were overwhelming. This book will leave you feeling all kinds of ways. It’s definitely worth the read.

Please click HERE to puchase In Sheep’s Clothing on Amazon.