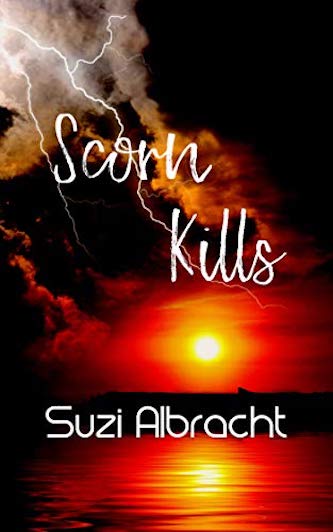 If this story has a moral it might be “when you sell your soul to the devil, expect to get burned.”

Today, I woke up in another man’s coffin, under some poor soul’s limp body. God help me, I think I know who it is but it is so dark in here. I also know who’s behind this.

Before the lid to my coffin shut, I swore I saw my dead father-in-law in the corner of the room, his fingers crusted with dirt and dried roses from digging himself out of his grave. He was clutching that damned contract he made me sign in my own blood. Or maybe my fear is causing me to hallucinate.

But did I also dream up that monster, Royce, cutting off my thumb? I can’t lift my arm to see.

But I know for sure my formerly loving wife helped shove my body into this cramped chariot to hell. Surely, she’s just punishing me for my indiscretion with the lovely Karina. She’ll come back any minute and let me out. She loves me unconditionally. Surely she knows that I always came home to her.

Argggggghhhh, my coffin’s rocking. Is that the crematorium firing up? Where the hell is Bianca?

Scorn Kills by Suzi Albracht grabbed my attention with the first sentence and held it throughout this book. A somewhat tongue in cheek examination of man’s weakness when it comes to women and money (not necessarily in that order)

Albracht created a character I wanted to smack in the head. From the beginning, Bill Branch is obviously an opportunist. I liked him and almost felt sorry for him when he first became entangled in the web of lies he spun. But as the story unfolded I began to lose patience with good old Bill. Without giving away too much I will say I had very little sympathy for him at the end.

He is never satisfied with what he has and always seems to be looking for something better. His well-to-do wife has secrets of her own that make the story even more compelling. The ending was a surprise I didn’t see coming.

If this story has a moral it might be “when you sell your soul to the devil, expect to get burned”.

Though I devoured this one, it sticks to my memory as if I had studied it for a test. Truly memorable, and gripping. Suzi bends a few of the “accepted” rules with this one, but she does it in such a way that you laugh after you finish, and wonder why those rules are there in the first place.

The characters are well developed, even a bit overdeveloped at times. This makes the twists and turns hidden in the plot even more unexpected. I can remember at least three occasions where I thought the story was about to wrap up, yet all it was doing was giving me a chance to gulp down a lungful of air before taking off again at full speed.

It is a short read, I believe somewhere in the novella category, which means there is a ton of information packed into the work. Yet, the length works for the story, not against it. Set in the modern day (or close thereto), the described scenes are rich and vibrant. The plot will have you laughing, groaning, and ready to slap the main characters silly – all these emotions within paragraphs of each other.

What I liked most about this book is the main character’s snappy attitude, outrageous motivation and wacky inner dialog. There were less than a half dozen well-drawn characters, and each character’s motivation, problems and actions were easy to follow which made SCORN KILLS a quick, enjoyable read.

I don’t want to drop any spoilers, but can’t resist saying that the main character is a really lovable jerk (and ‘jerk’ is being polite)! I know this doesn’t make sense but it’s true. The main character is simply up to no good, but he’s telling you the story while he’s doing it and his inner thoughts and foibles are often hilarious.

He rationalizes his outrageous actions in such a way that I started to like him. Or . . . maybe I didn’t really like him but I really enjoyed going along for the ride while he got himself into deeper and deeper trouble. Shakespeare wrote, “Hell hath no fury like a woman scorned” but I don’t think Shakespeare meant it as a joke!