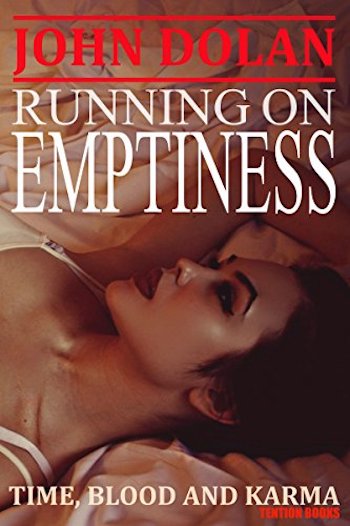 The ghosts of his past misdeeds are coming home, and they are bringing devastation in their wake.

It is the summer of 2006. In Thailand, the army makes preparations to overthrow the elected government of Thaksin Shinawatra.

Against this backdrop of political turmoil, destinies are shaped as events ensnare a corrupt Police Chief and his dying wife, two warring drug lords, an embittered widow, and a vengeful gangster.

While dreams and obsessions play out on the streets of Bangkok, private detective David Braddock finds himself mired in guilt. The ghosts of his past misdeeds are coming home, and they are bringing devastation in their wake.

Running on Emptiness is the fourth volume in the ‘Time, Blood and Karma’ series.

It’s taken me two weeks to finish reading RUNNING ON EMPTINESS. It’s not because the story did not capture me, on the contrary, it stayed with me each time I put the book down until I picked it up again.

The reality was I did not want the story to end. I prefer to prolong my gratification.

And gratifying it was, along with heartbreaking, exhilarating, shocking, and any other number of praiseworthy adjectives I can bestow upon the book.

I will not rehash the plot, but suffice it to say it is a complex web, best appreciated if you read books 1-3 in the series first. If you choose not to, there is enough back story to catch you up to the plot, but you will miss something vitally important—the progression of the characters. Their development across the four novels does not merely serve as plot points. Instead, Mr. Dolan mines the emotional depths of the characters to drive the story forward.

That is to say, we may not know what it feels like to be David Braddock, a PI living in Thailand amongst gangsters and crooked officials, but we know what it is to suffer loss and lies, to want love and not have it returned, to have parents we don’t talk to and children who have died.

We see ourselves — just a little bit — in Mr. Dolan’s characters, and it’s this recognition that enables us to hate his villains with a passion and weep at the demise of characters we’ve grown to love. We are invested in the book because we care deeply about what happens to the people in it.

It takes mastery over a subject to tell a good story, and on the topics of Thailand, Buddhism, and history, Mr. Dolan has done his research. More than this, however, I give him kudos for his insight into the human condition. He may lure you into his web with an engaging plot, but it’s his characters, written with mindfulness and authenticity, that will keep you reading.

In Running on Emptiness, author John Dolan deftly draws together plotlines from the three previous books in the Blood, Time and Karma series. In it, he weaves together the various players and quandaries that populate David Braddock’s world into a masterpiece of fiction. Journal entries from the protagonist are interspersed throughout the novel, giving the reader his POV on the various forces of evil and chance that propel the dynamic cast through a cyclone of mayhem and misadventure.

There are several catalysts at work here: a bombshell manuscript by a renegade journalist; a suspicious death during a magic show; a power shift in a crime dynasty that triggers an all-out war; the reappearance of a murderous thug, hell-bent on vengeance, last seen going up in a ball of flames; a terminally ill lover who uses all her aces-in-the-hole in one last act of defiance; a bent police commander with a shameful secret; a military coup that shuts down the country. The Old Monk rounds out the cast of characters that gives the story its swing and verve.

I couldn’t have enjoyed this novel more. It is thoroughly satisfying on every level. The writing itself is flawless. But I must give you one warning: this book may spoil you for all other offerings in the Mystery, Thriller, Suspense genre. It’s that good!