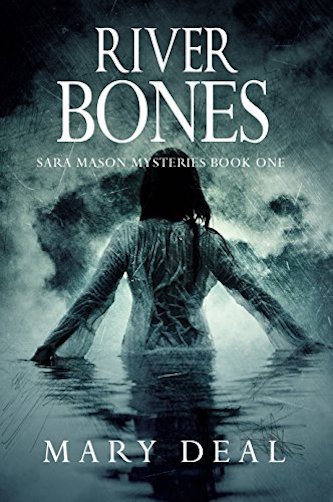 It was very creepy and left me unsettled as I tried to figure out who the serial killer was.

A serial killer is on the loose in Sacramento River Delta.

When Sara Mason returns to her hometown to start a new life, she learns that a murderer is terrorizing its residents. Despite battling difficult childhood memories, Sara is determined to make peace with her past.

But she soon learns that the elusive psychopath is now stalking her. Sara’s attempt to rebuild her life is hindered even more by the discovery of skeletal remains on her property. As the investigation focuses on several suspects, Sara discovers critical clues and bravely volunteers to be a decoy for the sheriff’s department.

Sara’s destiny has brought her back home, but will her decision lead her down a path lined with danger… and straight into the arms of a madman?

This is the second book I’ve read written by this author and it doesn’t disappoint. The author has a distinct writing style and her descriptive narrative fascinated me; from her geographical presentation of the Delta area with its canals and dykes to her colourful characters.

This is a story that moves along at a fast pace. I wasn’t able to figure out who the killer was, even when the heroine of the story, Sara Mason knew who the perpetrator was. I liked this protagonist because she was a strong woman but flawed. And sometimes her strength came from her sense of purpose and strong character, and sometimes from a stubborn recklessness.

A number of her well-defined secondary characters could have been the killer and the author did a great job of leaving the reader guessing.

I am definitely a Mary Deal fan and intend on reading more of her books. If you like crime and mystery, this is a story you’ll want to read. And so I move on to her next book.

Mary Deal establishes herself as a mistress of the genre and her novels should occupy a prominent place on the bookshelves alongside works of Daniel Silva and Michael C. Grumley.

Deal has a unique narrative style, a compelling voice, and a gift for character that brings to life characters that are psychologically and emotionally rich, and plots that are conflict-driven and gripping.

Offering readers a thrill a minute, each page packed with the emotion that rubs off on the reader; in a word, River Bones is terrific.

I enjoyed this story. It was very creepy and left me unsettled as I tried to figure out who the serial killer was. The climax of the book was intense and very well written!

I like Mary Deal’s writing style, as I enjoy descriptive text. She also had great dialogue, creating interesting characters. She did a wonderful job of keeping me guessing what was going to happen next and the story was full of surprises.

The suspense built throughout the tale and for me, the last third of the book was really engaging and hard to put down. Though the entire story had forward momentum, the tempo of the story was swift and eventful, drawing me into the last portion of the book completely. I really enjoyed the twists and turns of the finale!

It was clear the author knew the Delta area described well and she did a great job bringing it to life for the reader. I am looking forward to reading more from this author and I do recommend this book.

Serial killers stalk victims without their knowledge. Many fall prey to these people because their victims do not follow a specific profile or age group. Sara Mason returns to the Sacramento River Delta area and moves into a house that she is warned has a history attached to it.

Owners Orson and Esmerelda Talbot were the second owners of the old Victorian, but he disappeared leading this to be not a great omen. The entire area in which she lives has been consumed with finding this killer but no one knows where to start.

Imagine a skull sticking up at you out of the ground and then the remains of a person found. Each victim having one thing in common: the hyoid bone in the person’s neck is broken and they are buried with the remains of an animal.
As the pieces start to fit together, there are many suspects that come to light:Ike the cat killer, Fredrik, the nurse who is obsessed with death, and Daphine who seems to be Sara’s friend but is she?

Author Mary Deal created a plot so filled with surprises, twists and turns she keeps the reader guessing and hopefully not able to figure out who the killer is and who, for more than 20 years, has been burying bodies with all of their possessions and the remains of an animal.

Making the book unique are the descriptions of the Delta area, the history behind the area, and the many festivals and places that make this area so special.

As the body count rises and the victims are starting to be identified, just who the killer turns out to be will definitely surprise and shock for the reader.

Please click HERE to find River of Bones on Amazon.