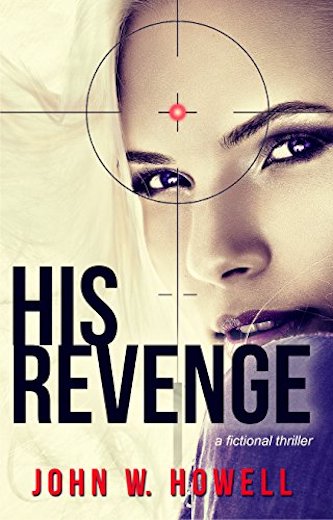 He struggles to thwart a diabolical scheme to hamstring the government, while also contending with betrayals and a pair of beddable beauties.

America loves John Cannon, its newest hero, and the President wants to present him with the highest civilian medal for bravery for saving the Annapolis midshipman from a terrorist plot to destroy them.

While in Washington for the award ceremony, John unwillingly becomes an accomplice in another plan by the same group to attack the credibility of the US President and the stability of the worldwide oil market. There is no way out as John either becomes a traitor to America or causes thousands of innocent people to die if he refuses.

The second John J Cannon Thriller moves from a barrier Island off the coast of Texas to Washington DC, then to Northern California, and finally to Ecuador. John is on the receiving end of an offer he cannot refuse. His avowed enemy Matt Jacobs now wants John to help him shake the reputation of the US in the world political arena.

If John refuses, Matt plans to murder innocent Americans including John’s latest relationship. John’s only way out is to pretend to go along with the plan and hope for a miracle.

John Howell’s second outing with main character John Cannon will appeal to readers who like a lighthearted mix of brisk action, wild situations, gourmet food, soft-core sex, and a resourceful but somewhat naive hero—picture a combination of James Bond and James Coburn’s Derek Flint—will be captivated by His Revenge.

The first person, present tense viewpoint employed by the author—no easy feat—places the reader intimately in John’s shoes. You become him, other characters being perceived through his eyes and thoughts.

In Howell’s preceding book, John is a lawyer on sabbatical who runs afoul of a billionaire who was stung by one of John’s legal cases and who attempts to murder a bunch of midshipmen. John, who relies on lawyerly guile more than physical prowess and who comes across as an everyman out of his element, manages to thwart the terrorists, but his friend is killed.

In this sequel, John is up against the same villain and his henchmen. Temporarily blinded and half paralyzed from the previous action, John struggles to regain full capacity while trying to avoid being assassinated by snipers to prevent him from testifying. In subsequent action—think Jimmy McGill of “Better Call Saul”—he struggles to thwart a diabolical scheme to hamstring the government, while also contending with betrayals and a pair of beddable beauties.

Read the book with a decent bottle of cabernet and a plate of smoked oysters.

The story does take a little time to get into since it begins with John Cannon recovering from injuries sustained in his previous adventure. Since it was a temporary eye injury, there was a lot of focus on other senses. This made for an interesting opener, but I will admit that I did hit a point where I wanted things to move a bit faster. This was about a chapter before someone hit the action button because the pace really picks up after the first gunshot.

I really liked how John Cannon came across as a guy who lacks combat experience and knowledge. In some situations, it means he’s almost useless. Other times, it forces him to think on his feet and take actions that I found very believable. He doesn’t go into the adventure like an action hero, but more like a man who has stumbled into a bad situation.

It made him fairly relatable at times, especially since you’re viewing everything through his eyes. So, you know that he isn’t comfortable or completely sure of himself. In fact, I never got a feeling of confidence from him that made me think he would get through unscathed, which I really enjoyed.

One thing that did catch me off-guard was how much I truly despised the villains. The way Jacobs and Winther were written just boiled my blood. It wasn’t that they were pure evil, but there was just this smarmy arrogance that irritated me.

There was no way I would want to see these guys get redeemed and every appearance had me hoping that someone would smack them around. The desire to see these two get what’s coming to them became a driving force for me to keep reading. Not sure if that’s a noble reason, but you definitely get your money’s worth if you’re looking for villains.

I would like to say more about the story, but I find that’s hard to do without leaving spoilers. There are plenty of twists and turns that got me wondering what would happen until the very end. So, there’s plenty of suspense as soon as the leash is taken off the story.

Please click HERE to find His Revenge on Amazon.