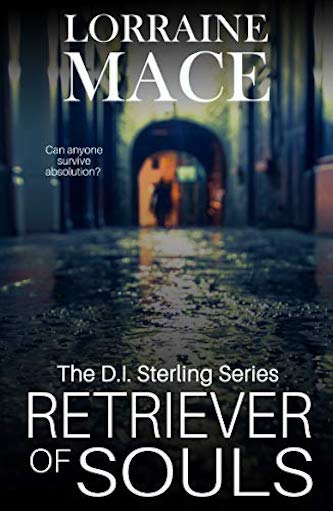 When the hunt becomes personal, Sterling finds himself involved with a killer that’s never been seen before.

The first title in a dark and gritty crime series.

Detective Inspector Paolo Sterling is out to stop him, but Paolo has problems of his own. Hunting down the killer as the death toll rises, the lines soon blur between Paolo’s personal and professional lives.

I was hooked on Retriever of Souls from the opening scene. I’d planned to read only two hours before dinner but got lost in the pages and didn’t move for the next four hours and thirty-nine minutes. Dinner was late that day.

Prostitutes are being murdered, beaten beyond recognition before they’re strangled, and discarded in garbage dumps and trash heaps around the city. All too often, it’s easier and less work to blame sex workers for their plight and little is done to investigate their deaths.

Such is not the case with Detective Inspector Paolo Sterling. He takes every case seriously, immersing himself in the details of the crime.

Even more so when he believes the latest body found is connected to Frank Azzopardi, a former high school classmate and local gangster he could not make a case stick against, thanks in part to Azzopardi’s attorney, Matthew Roberts, another former classmate.

However, Paolo’s not one-hundred percent focused on the job. A family tragedy has left him separated from wife Lydia, who has a hard time being civil to her estranged husband.

The story follows DI Sterling as he tries to stop a dangerous killer. When the mutilated body is found and IDed, he thought he had got his man, but trying to make a case against him was harder than he thought. Not only had he got more bodies turning up, but he was also trying to get used to being separated and still being a good dad to his teenage daughter.

The story alternates between DI Sterling and the killer, without being confusing. Reading the killer perspective shows you just how sadistic and troubled the killer was.

As you follow DI Sterling you realise just how much of a mess his home life and when more pressure is put on him by his wife, it is a wonder he doesn’t crack.

His working relationship with his partner DS Dave Johnson, starts off a bit rocky and it did come across as he did not want to work with him, but as the story continues you see him more as a mentor.

As soon as you start the book you know what you are getting into. From the first scene, you are taken on a dark journey. There are some topics and scenes that some readers may find disturbing but this adds to the grittiness of the story.

The hunt for the killer is hidden with twists and red herrings, that kept me guessing to the end. The plot was well thought out and was fast paced.