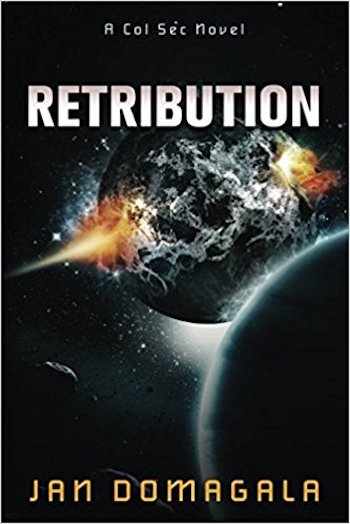 The high tech explanations throughout the novel are woven in expertly as non-stop action keeps readers at the edge.

An explosion on the planet Toldax, uncovers two startling discoveries. Shortly after, Kurt is attacked on his homeworld of Celeron by a group of strangely similar looking men. He easily survives but the incident raises more questions than answers.

Are the discoveries on Toldax and his attack linked? Is this the beginning of a scheme by an old enemy that will lead Kurt back to Celeron where he must face the truth behind one of the discoveries? In his struggle to face that truth Kurt takes another step toward his enemy’s endgame, and an attack on the teeth of Col Sec and the heart of the Confederation.

To reach this endgame Kurt and the Wildfire Team must overcome their past or face the devastating retribution of their enemy. “futuristic technology, battle bred clones, enough to excite any geek reader.”

It’s a very action packed book and an easy read. I like that Domagala put thought into character development with this being a series, we will probably see them again in future books. The dialogue between characters is believable.

And with each book, the characters personalities are recognizable, there is a familiar quality to them. You want the Col Sec team to win over adversity and want the bad guys to be obliterated.

But you know that having the villain get away makes for a known adversary in the next book. The issues that I had in the previous book weren’t apparent in this one. The transition between scenarios was more fluid and smooth.

I like that Domagala has a few female characters in the series that aren’t one dimensional. All though, they aren’t average looking women but buffed and beautiful.

I will read his next book in the series since I’m invested in the characters. I recommend this book to anyone who likes reading action science fiction.

All Zara Hardy remembers is being on the planet Toldax. She was an Alliance prisoner being used by the enemy of the Confederation to capture its top agent, Kurt Stryder. Zara is perplexed how she could even be in this sterile hospital room. The Alliance agent, Pavel Norsky, had recently killed her on the planet’s surface.

Thus begins Jan Domagala’s science fiction thriller, Retribution: A Col Sec Novel. In this fourth volume of the Col Sec series, Col Sec, the security arm of the Confederation, is threatened by OMEGA, a rogue terrorist organization. Once Col Sec is out of the way, OMEGA would fill the power vacuum in the galaxy.

But first OMEGA and its battle-bred clones need to capture Kurt Stryder, for the blood flowing through his veins could be developed into an unprecedented weapon.

Throughout the novel Domagala describes futuristic technology that will excite any geek reader. For example, all Col Sec characters have Neural Interfaces (NI). These NIs are like smart phones built into the characters’ heads. The weapons used during battle are amazing as well as the star ships and transport vehicles.

The high tech explanations throughout the novel are woven in expertly as non-stop action keeps readers at the edge. As Zara is used as a pawn to capture Stryder, the twists and turns throughout this sci-fi thriller will keep readers turning pages from first to last page