Daily Review: A Psilent Place Below by Marcha Fox 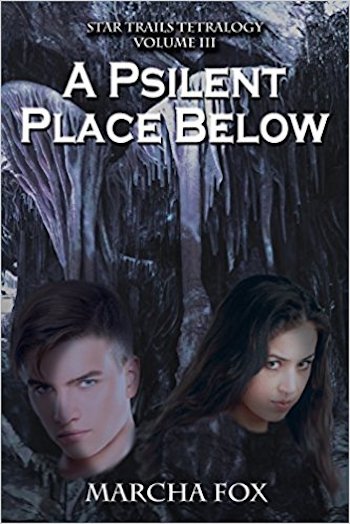 Finding refuge from Cyraria’s lethal heat in an underground network of caverns, it doesn’t take Dirck Brightstar long to discover these are no ordinary caves. Something has not only intensified his awareness but brought visions of events to come that have dire consequences if allowed to proceed without intervention.

With his father’s imprisonment motivated entirely by hostile political forces, the revelation that the man’s life is in danger demands action. Plunged into a level of responsibility and intrigue far beyond what Mira III prepared him for, Dirck has no choice but to tackle the evil forces which have scattered the family across the galaxy if he ever wants to see everyone reunited again.

This is the third volume of the Star Trails Tetralogy following both Beyond The Hidden Sky and A Dark of Endless Days. While intended to be read in order each can be enjoyed independently. Visit www.StarTrailsSaga.com for additional information about the series and Star Trails universe including a glossary of terms and definitions. Also included is a section for parents and educators who may wish to use the books as a springboard for discussion.

A Psilent Place Below by March Fox is an intriguing sci-fi, supernatural action-packed read. Two brothers part of the Brightstar Clan must first save their father with the help of their uncle. Soon after they rescue their sister bringing everyone back to the magical tunnels they have sought refuge in. The tunnels give them special psi powers of communication and the ability to see the future. Together they work against INTEGRATION which is quickly sweeping the planet.

Fox’s words are vivid enough to imagine the whole story unfolding on a planet somewhere in the vast universe. She has created an entire world and its inhabitants along with various languages and races that each have unique abilities and qualities. Her extensive knowledge in science is evident in the explanations that are utterly believable. The best part is this book is only one in the Star Trails Tetralogy Series.

Great story for all ages!

In A Psilent Place Below, the third book of the Star Trails Tetralogy, the familial dream of togetherness still seems far away for the Brightstar family. Laren Brightstar languishes in prison while his two older children, Creena and Dirk, still seem to have one foot in childhood. As they struggle to find their purpose within the family, they waste their energy by indulging in petty arguments and childish insults.

Creena trusts her intuition and Dirk trusts his logic and tradition. Creena is beginning to understand that she needs Dirk’s logical approach to temper her impulsiveness, but Dirk is exhausted, on-edge, and not as forgiving as he worries about filling his father’s shoes. Despite the family’s inability to achieve their desired state of togetherness, their loyalty to each other and their goal has never wavered since the first book of the series, A Dark of Endless Days.

In the third book, all the Brightstars are on the same planet, Cyraria, but still are separated. The family’s arch nemesis, Augustus Troy employs futuristic technology to monitor their communications, their movements, and make their life a living hell. Not one of them would have consciously chosen this austere path; yet, choices were made, perhaps through default, that brought them to the scorching plains of this hostile planet where temperatures can reach 214 degrees Fahrenheit? When the Brightstars discover the caverns and its indigenous bnolar species, their lives take a sudden turn for the better.

The caverns, the psychic bnolar, and their new sense of security create an atmosphere that takes the family to A Psilent Place Below. No matter how extroverted we think we may be, we live within ourselves. Inside, we crave peace, security, love, and unity; yet, all too often these very things elude us for lifetimes. When Creena joins most of her family in the caverns, she believes that her family will soon reunite and the future will be bright. “The caverns are safe…and their beauty soothing,” she says. “It felt good on the surface, but a dark and heavy remnant was gathering inside that she couldn’t entirely escape, no matter how hard she tried.”

The caverns are a place where the purity of Truth reigns and Creena is on the verge of discovering a higher truth. “[It’s] as if something had ignited a glow within her that cast out darkness and filled her with light.” She realizes now that the contentment she’d felt (before) was artificial.

The lives were still in danger and nothing had changed, but something is changing and that is Creena herself. “This was real. It was more like unexpected strength, arriving only when she’d bid farewell to denial.” The moment we face a higher truth, the lies we’ve told ourselves shrivel up and disappear. In Creena’s case, once she makes peace with her denial she becomes a powerful force within her family unit.

I enjoyed the supporting cast of characters in these books that are assisting the Brightstar family in their quest: Aggie the robot; Enoch, the lumbering, kind-eyed bnolar; Thyron the Vegemal, a sentient plant who communicates only in rhyme; Captain Formicidae/ Ignatius, a insectoid; and an incredible human boy named Win that’s proving to be a technical genius. I look forward to more books from this author. Her playfulness with the supporting characters is creative and humorous.

Please click HERE to purchase A Psilent Place Below on Amazon.