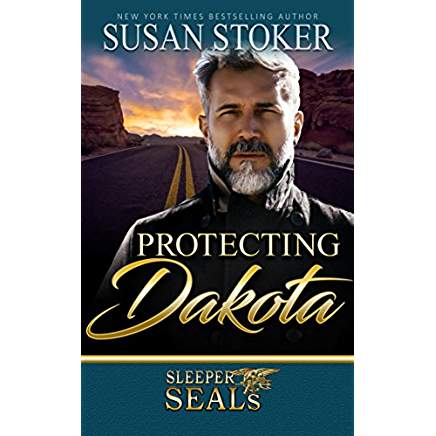 She’s on the run. A terrorist wants to kill her. Can the SEAL find her in time? It’s a story both suspenseful and romantic.

Dakota James’s life has become the stuff of nightmares. The leader of the Ansar al-Shari’a terrorist group has become obsessed with her, determined to take her as his wife. On the run, she’ll have to pin her hopes on the retired SEAL charged with finding and stopping Aziz Fourati before he can carry out plans to bomb more US airports.

Recently recruited to join a sleeper SEAL team tasked with fighting terrorism on US soil, Slade “Cutter” Cutsinger, with the help of some Special Forces friends, has located the one woman who can identify the deadly Ansar al-Shari’a leader. That was the easy part. Keeping her safe proves more difficult than anyone ever imagined.

When she and her new friend, Caroline, are kidnapped by the terrorist group, Dakota can only pray Cutter and the SEALs will reach them before they’re taken out of the country–and away from Cutter forever.

Susan Stoker is back at the helm of a brand new series! She, along with eleven other authors have come up with the Sleeper SEAL series. Protecting Dakota is the first book in this series, and it’s also the last book in her SEAL of Protection Series. And though I’m sad to see it go, there will be a new SEAL series to follow.

The premise of all of these books is that a select group of retired SEALS are chosen to go on solo missions to take down terrorist threats. In this first book, Dakota is the lone survivor of a terrorist incident and the leader, Aziz Fourati, wants Dakota for his own.

Slade, as soon as he sees Dakota’s picture, knows she’s special. So he finds her and then they are soon on the run. Aziz is hot on their tails, but they get closer to each other as well. This was another great Susan Stoker book! I could read her books one after another without stopping, they are just so super amazing, like Susan herself!

Protecting Dakota is another awesome book by Susan Stoker!! It is Book 1 in the Sleeper SEALs series. I loved everything about this book, & thoroughly enjoyed reading it!! It’s touching, suspenseful, exciting, & romantic.

Slade has been recruited to join a sleeper Seal team. Working solo, his job is to find Dakota & learn the identity of the leader, who had ordered a bomb blown up at LAX. Dakota is the only one who knows what he looks like. She is on the run, & Slade needs the find her.

When they meet, their attraction is undeniable. Slade & Dakota are both in their 40s. They both decide to take it slow, & find the terrorist leader first, before exploring a relationship. You will also love hearing about Tex, Wolf, Caroline & the rest of the Seal team.

I HIGHLY RECOMMEND FOR EVERYONE TO READ!!!

Retired SEAL Slade “Cutter” Cutsinger takes on a special op to find a terrorist that exploded a bomb at the Airport killing a lot of people. Dakota, a school Principal, is the only survivor from the bombing and she can ID the terrorist.

The terrorist wants Dakota back and it’s up to Cutter and the Seals to help him protect her. Cutter and Dakota are amazing together, proving it’s never too late to find your soulmate.

I’m sad that this is the end of the Seal of Protection series but I’m looking forward to the new Seal series (you get to meet the new team in this book). Check out this first book in the Sleeper Seal Series, I promise you won’t be disappointed.