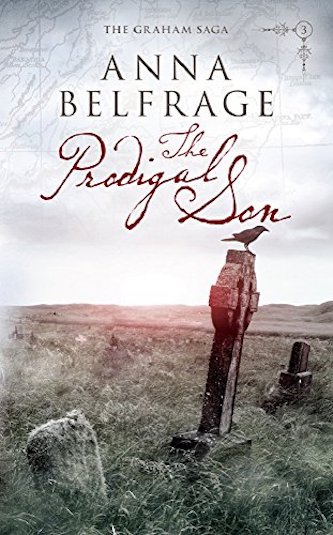 How much is Matthew willing to risk? How much will he ultimately lose?

Safely returned from an involuntary stay in Virginia, Matthew Graham finds the Scottish Lowlands torn asunder by religious strife. His Restored Majesty, Charles II, requires all his subjects to swear fealty to him and the Church of England, riding roughshod over any opposition.

In Ayrshire, people close ranks around their evicted Presbyterian ministers. But disobedience comes at a high price, and Alex becomes increasingly nervous as to what her Matthew is risking by his support of the clandestine ministers – foremost amongst them the charismatic Sandy Peden.

Privately, Alex considers Sandy an enervating fanatic and all this religious fervour is incomprehensible to her. So when Matthew repeatedly sets his faith and ministers before his own safety, he puts their marriage under severe strain.

The situation is further complicated by the presence of Ian, the son Matthew was cruelly duped into disowning several years ago. Now Matthew wants Ian back and Alex isn’t entirely sure this is a good thing.

Things are brought to a head when Matthew places all their lives in the balance to save his dear preacher from the dragoons.

How much is Matthew willing to risk? How much will he ultimately lose?

This third installment of THE GRAHAM SAGA begins with Matthew Graham being hauled away under arrest for aiding and abetting Presbyterian Ministers and hiding them from the Crown. Frankly, it was all too much for this reader right on the heels of book #2 Like Chaff in the Wind (The Graham Saga Book 2).

I mean I was just beginning to catch my breath from that fabulous second book, only to be thrust into the trials and tribulations of the religious unrest that are facing our beloved Matthew and Alex. All the traumatic events just keep crashing down upon these two young people and I’m only left to wonder, “will they ever catch a break”?

Given the era in which they live, probably not… I’m tired of reading about more bad luck, even though later in the first two chapters I learn it’s 2-3 years later since Matthew has been rescued from the depths of his hell as a slave in Virginia and returned home to Scotland, once more a free man.

This entire third installment is about the persecution of the common people standing for their Presbyterian faith — being forced to renounce their religious beliefs by the King or face death.

At the same time, it’s the story of the struggles of a young boy coming of age while wondering who his real father is and searching for the truth. It’s a fabulous continuing saga of epic proportions of Alex and Matthew’s profound love for each other and their struggle to overcome so many political obstacles to safely raise their family in a time of frightening unrest.

It is structurally well written carrying a solid, historical plot. Lust balanced with emotion…a harsh life filled with nothing but hard work, but full of the simple pleasures of life that are greatly valued. And Ms. Belfrage tells it so well.

Again there are some similarities to Outlander. It’s sort of like Ms. Belfrage used OUTLANDER as a guide for her storytelling. Even so, I’m addicted to this saga… enough that I must continue with the fourth book. I love Alex Graham…she’s smart and intelligent….sassy and saucy….stubborn, opinionated and perky.

She’s a real spitfire on two legs — ready to take on the world and anything else that stands in her way. This installment held enough suspense balanced with victory. There is humor as well as sadness that made me bawl buckets of snot-filled tissues.

The dialogue is witty and nicely balanced with narration. If you are looking for a story of epic proportions; of historical facts intertwined with romance and fictitious characters (and a few historical correct characters as well..)..then begin at the beginning… (although Ms. Belfrage adeptly brings us up-to-date with each installment….this third installment could easily stand alone).

This page-turner of a story is set in Scotland during the reign of Charles II, in the middle of the Seventeenth Century. I knew little about the period and even though this is a work of fiction, I learned quite a bit about the repression of the Scottish people because of their beliefs in the Presbyterian church. This is not a religious book in any stretch of the imagination. It is set during a time of great turmoil, civil war, and religious persecution. There were strong feelings on both sides regarding religion.

The Prodigal Son is the third book in a series written by Anna Belfrage. It stands on its own merit and can be read without reading the first two volumes. The story is seen through the eyes of one family, beginning in 1665. The two major characters are Alex Lind, who is a 21st Century time slip-wife of Matthew Graham a rigid, staunch Presbyterian, who is determined to defend his religion, and its ministers, even at the cost of losing his life and family.

Alex, an intelligent, strong-willed, feisty woman is just as determined to bring him to her way of thinking and make him understand that he should think of her and the children first.

The novel is full of plot twists and emotional minefields which tug at the reader’s hearts. There are a couple of scenes in which the reader may shed tears, I won’t give them away.

There are several subplots which involved the continual harassment by English soldiers as they try to catch Matthew hiding renegade minister’s; Matthew’s brother, Luke, who hates Matthew’s guts; and the relationship Matthew has with his ex-wife, Margaret–she arbitrarily dumps her son, Ian, into the lap of Alex and Matthew’s and leaves Scotland to be with Luke, who is now her husband.

It is Ian and the protection Presbyterian Minister, Sandy Peden, by Matthew, which the story revolves around. Although the book title, The Prodigal Son, is obviously about Ian, I was a little confused as it seemed so much emphasis at the beginning of the story was placed on hiding and protecting Sandy Peden from the English which is seen throughout the entire story. However, the theme became much clearer as Ian’s relationship with Alex and Matthew grows stronger as the story progresses. This is but a small detail.

This story is well-written and each character has his or her own distinctive voice. You will not want to put this story down until you reach the end.

Please click HERE to find The Prodigal Son on Amazon.