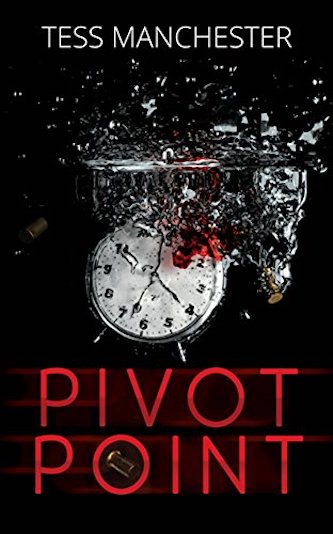 Manchester manages to keep the story midway between science fiction and the paranormal.

A fugitive brought them together. Fate gave them a second chance…

Fiery U.S. Marshal Blake Parsons is on the hunt for a dangerous fugitive. Time is running out, and the locals in the small Tennessee town aren’t much help at all. Just when she’s almost given up hope, fate strikes in the form of deja vu and a rendezvous with stunning local doctor Naomi Preston.

As sparks fly, Naomi agrees to make inroads with the residents and help Blake find the killer. When a massive flood strikes the town, the search begins to heat up.

Will they catch the killer amidst the chaos, or will fate turn Blake and Naomi into his next victims?

Pivot Point is a gripping romantic thriller set in the deep south. If you like fast-paced action, sizzling chemistry, and a touch of humor, then you’ll love Tess Manchester’s tale of deja vu and a deadly killer.

Book 1 in the True Time series.

Pivot Point is an intriguing crime story with twists. Having a second chance to make different choices and change the outcome is something we all wish we could have.

The main character, Blake Parsons, is lucky enough to have that chance. I love that the main character is a strong female lead who works the case until she gets her fugitive.

The story keeps moving so it’s a quick read. I can’t wait to find out what happens next.

This might be confusing. I just reviewed a Pivot Point by Kasie West. This one is much better. This Pivot Point is exciting and full of surprises; not only for the protagonists but also for the reader. I was given a free ebook in exchange for an honest review.

First of all, this is the first time I read a novel in the present tense. That was my first surprise. I had the vague feeling I wouldn’t like it because of that. Strangely, I first justified continuing past the first few pages attracted by the very creative plot. Blake Pearson, a Deputy US Marshall, resets time. She then repeats the events to try to change the endings. The author calls them “time resets” or “pivot points.”

After the first few time resets I was convinced they were a device to arrive at more positive endings, and that I wouldn’t like the technique. Then I didn’t object to it. Finally, I liked it. This chain of changing feelings reminded me of the cereal commercial where siblings get their brother Mikey to try the new cereal. After all, Mikey doesn’t like anything. He winds up liking it.

Manchester managed to keep it midway between science fiction and the paranormal. The thing is, I liked it. And you don’t notice it capturing your curiosity because the primary plot gets under your skin. Violence, murder, fugitives, police action, mild sexual attraction and frank humanity at its best and worst.