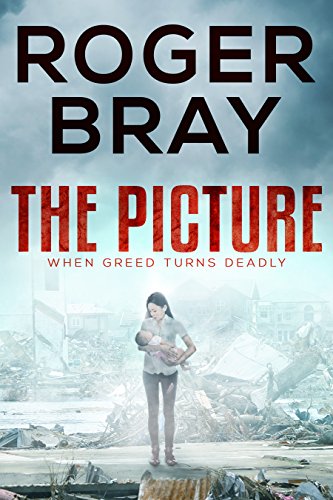 Read The Picture if you are looking for a very different, wild thrilling ride, cleverly written and relevant to today’s society.

A warehouse in Japan used as an emergency shelter in the aftermath of the 2011 Tsunami. A distraught, young Japanese woman in disheveled clothes sits on a box, holding her infant daughter. Ben, a US rescue volunteer, kneels in front of her offering comfort.

They hug, the baby between them. The moment turns into an hour as the woman sobs into his shoulder; mourning the loss of her husband, her home, the life she knew.

A picture is taken, capturing the moment. It becomes a symbol; of help freely given and of the hope of the survivors.

The faces in the picture cannot be recognized, and that is how Ben likes it. No celebrity, thanks not required.

But others believe that being identified as the person in the picture is their path to fame and fortune. Ben stands, unknowingly, in their way, but nothing a contract killing cannot fix.

The Picture is a fascinating, hypnotizing premise.

How often have we seen a picture in a book, a newspaper, a magazine, an old family album and wished we knew the rest of the story?

In one of the most compelling novels I have read, Roger Bray cleverly builds a story around a photograph taken during a devastating Tsunami that roared into Japan in 2011.

The photo is mesmerizing.

A rescue volunteer is hugging a distraught woman.

A child clings to its mother.

Their faces are masks of fear and grief.

Did they ever meet again?

It’s a moment frozen in time, and it grips our heart.

And often the answers are heart-wrenching but always intriguing and often riveting.

In the novel, the story slowly plays out. It touches our conscience in so many ways.

Hovering in the dark background shadows are crime and murder in the midst of heartbreak and tragedy.

The truth always seems just beyond your grasp.

But in the end, you’ll find yourself immersed in the story that crawls into your memory bank and won’t leave for a long time.

Just after the Tsunami in 2011, a photo was taken of a man knelt talking with a young woman and child. The photo didn’t show the faces of any of them, at the request of the man in the photo. Over the years people have tried to find out who the man was, but he didn’t want recognition. He had gone out to Japan as part of a rescue team and believed that the story should always be about the disaster and not him.

However knowing that the faces were blurred another man sees his opportunity to make some money and declare himself the person in the picture, gaining him fame and lots of money. With a reputation that could be in tatters if the real man ever came forward, how far will this unsavory person go to make sure he is never found out?

The Picture is a full-on, thought-provoking book. The story didn’t take the route I was expecting, as at the beginning I did re-read the synopsis and double check that I was reading the right book as the plot regarding the photograph didn’t begin a few chapters in.

In the beginning, we meet retired cop Ben who is taking a walk to his local convenience store reminiscing in his head about the old days and his motorbike. He then enters the store and quickly realizes that the place is being robbed. Although he doesn’t stand in the way of the robber, she shoots him, twice. Once in his shoulder and once just above his left eye. It is the second bullet which cases the most damage and ends up with Ben in hospital in critical care in an induced coma.

We then meet his estranged daughter Anna and his ex-police partner Paul who take it in turns to be at the hospital with Ben. During there regular coffee breaks together, Paul tells Anna about the picture. She is disappointed to learn that another man, Vince Brown, had declared himself the man in the photo when all along it was her father.

Vince isn’t a man to be messed with though. He is money hungry and will stop at nothing to make sure he is never outed as a fraud.

I was hooked right from the beginning, even when I couldn’t see how the photograph was going to come into play. The characters are just perfect and are so believable and likable too – well apart from Vince, who was in way over his head.

I found myself immersed in the exciting plot. The thrill just never stopped, right up until the final page. It is cleverly written so that you are pulled into the characters lives, and become emotionally invested in them. It is also modern and relevant to today’s society.

It was just a pleasure to read. It was intriguing and held me captive right to the very end.

Please click HERE to find The Picture on Amazon.