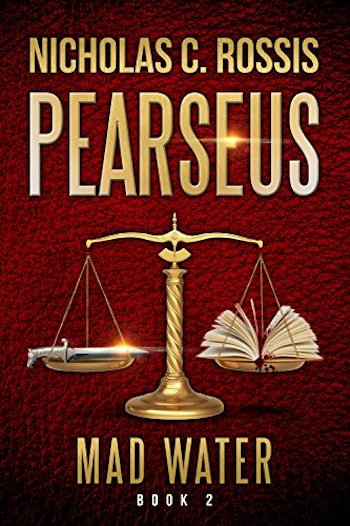 All Lehmor wants is to warn the First of the imminent danger presented by the enigmatic Iotas—the planet’s original inhabitants, long thought extinct by everyone.

But a chance encounter with Cyrus leaves him almost dead until the Iotas rescue him. Will they convert him to their cause, or can he escape before they unleash an army of monsters on the unsuspecting First?

The dictator might be gone, but the aura of Pearseus, if anything, darkens. Cyrus, the new ruler of the Capital, might have a purer heart, but his mind is equally addled. Gella teams up with Theo to fight Jonia, but their outlook couldn’t have been more different. Lehmor wants nothing more than to reunite with Moirah, but his trek takes him to a different realm where he uncovers a threat like no other. And when he spreads the word, instead of unity, deeper rifts are created.

In a planet rife with passion, ambition, envy and love, everyone has an agenda, feeling quite smug for pushing it forward. If they knew what lurks in the shadows, they might be able to see the strings attached to all their limbs.

This is an ambitious series. As I noted in my review of the previous book, Rise of the Prince, it is not just about survival on a foreign planet and co-existing with other races. It’s a study in human nature with philosophical undertones—a thought-provoking tale. But that is not at the cost of the book’s readability. The action here picks up as strong personalities clash and devious plans are put into effect. Heroes of the past turn villains, distrust grows and not just of perceived hidden agendas but of the way their entire world is perceived.

What I particularly enjoyed in this book is that Nicholas C. Rossis assumes a take-no-prisoners approach in the language he uses. It’s as if the protagonists are finally taking position center stage for a bare-knuckled fight, and the reader can see every muscle twitch while they stare each other down. But what’s super exciting is that we know that the referees of these matches are not only invisible, but they have vetted interests in the fights they’re officiating. Who will win?

Even though foreign worlds with a multitude of characters are not my usual read, I can’t wait for the final installment of this exciting and stimulating series!

Nicholas Rossis has managed to capture my attention with the Pearseus series. Each of the books is a standalone story and can be read separately without being too lost with regard to what’s going on. I started at the second book and have now read the third book. Needless to say I should probably go back and read the first one, but the author does an excellent job of explaining things along the way so that you can catch up if you come late to the party. In fact, I had forgotten how engaged I was by the story from reviewing the second book, Rise of the Prince, until I started reading this one and was immediately brought back to the story.

There are all kinds of problems on Pearseus. Far more than I could ever list here and have it be coherent, but it sure keeps things interesting. The Pearseus series covers a period of about 300 years. I haven’t read the first book, Schism, but a pretty good rundown is given in the second book and Mr. Rossis does an excellent job of explaining things along the way for newcomers to the series. There were some typos and incorrect word usage in this book, but overall the story is interesting enough that I didn’t mind coming back for a second tour of Pearseus.

Rival factions are going all out in this latest installment. Mankind may have been thankful that Pearseus was suitable for human habitation when they crash landed, but the centuries since have taken a toll on mankind as Pearseus’ other inhabitants wage war with and through the humans. The Orbs and the Whispers, benevolent and corrupting entities that sprung to life when Pearseus was terraformed by the First’s human ancestors, influence the humans who inhabit Pearseus in this war.

Lehmor, a member of the First, is one of my favorite characters in this story. Lehmor, who cannot become chieftain of the First tribe, the Wind Warriors, because he has lost an appendage and is not considered able-bodied is thrust into circumstances beyond his imagination with the Iotas, the remnants of a civilization lost during an accident, after an altercation with an old friend. Lehmor’s experiences teach him much of the events taking place on Pearseus and he is driven to protect those he loves amidst the machinations of ethereal beings, the Iotas and humans corrupted by the Whispers. Challenges seem to arise at every turn.

There are many intriguing characters in this story and I’d have to go into too much detail to explain why they are relevant which would lead to a ton of spoilers. If you enjoy dark sci-fi with plenty of plot twists then this may just be a good story for you. There are plenty of decisions and moral dilemmas to keep the characters busy and the reader interested.

The characters in this story really came alive for me. There are plots and plans at every turn among the various characters to keep things interesting and moving at a good pace, as well as a good mix of action and thought-provoking moments.I don’t know if there will be another book in this series, but if there is I’m willing to read it and perhaps you would enjoy them too.