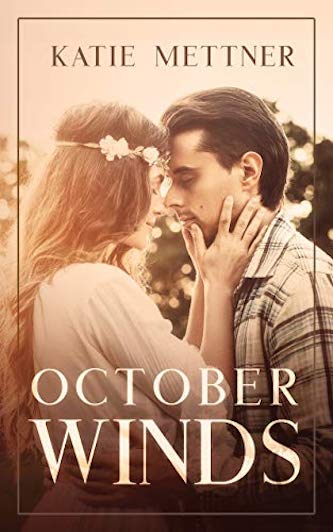 You can run only so far and so long from your past until you’re forced to face it.

October Halloran left her past behind and found happiness in a tiny northern Minnesota town working at a local truck stop. At least she was happy until Sheriff Jett Raven started asking questions she didn’t want to answer.

Jett didn’t buy the story ‘Sarah Banks’ sold the rest of the community. Smitten since the moment he first laid eyes on her, he knew she wasn’t who she claimed to be. It wasn’t until she stumbled across a dead body that he had a reason to dig into her past and bring her into his home.

Murdered truckers and attempted kidnappings lead October and Jett to the startling truth. With dozens of girls’ lives on the line, it’s up to October to discover who’s after her and why. It’s up to Jett to keep her alive.

This was an incredible book! It dealt with some of the worst conditions a person could find themselves in – homelessness, parental abuse, sex trafficking, and more. Katie handled the story with sensitivity, yet she conveyed the brutal truth of those horrible circumstances through her character, Sarah Banks/October Halloran.

There were many great themes throughout the book – how you can run only so far and so long from your past until you’re forced to face it, how resilient the human spirit can be, how even the most broken person can learn to love and trust again if the right person comes into their life. Katie made it clear that homeless people matter.

It was amazing what Sarah/October did to survive. Her heart, body, and soul had been battered to the point most people would have given up. She was strong, but without Sheriff Jett Raven’s help she probably would’ve perished.

She followed her instincts and finally her heart. The descriptions, dialogue, settings, and characters were powerful. I felt like I was there, witnessing the scenes as they unfolded. I also liked the Native American elements to the story.

“Zansaville is nothing more than a pit stop on the highway of life. It’s filled with truck stops, old bars, cheap hotels, and on the hill, some of the most expensive homes in the state. The owners believe they’re safe living in the middle of nowhere, but I know the truth––no one is safe.”

Jett is not the run-of-the-mill lawman. When October/Sara asks him if the images of the mountain lion, bear, and tiger on his bear will protect him, Jett answers: “The Native Americans believe it will, but we both know it won’t. I’m Sioux and carry the badge, but no one could say it offers me extra protection. I prefer my bulletproof vest to animal heads on a piece of metal.”

Katie Mettner writes inspirational and romantic suspense. October Winds definitely hits the target on both of those. But Ms. Mettner has outdone herself with October Winds. The book has a grittier edge and takes the reader on October/Sarah’s adventures with her.

Ms. Mettner addresses hard-hitting social issues, like homelessness and human trafficking. I love the slightly different perspective and style. I can’t wait to read Matt’s adventures in the next book.

October has a twisted past and she’s living under the radar until Jett, the local sheriff figures out her secret past. For both the attraction is instantaneous but Jett knows October is like a skittish foal. Jett has the patience of a saint. He’s one leading male you could ride off into the sunset with.

October is broken but has a heart the size of Texas.

October Winds is a story that is unique, fast-paced and a perfect mix of romance and suspense. If you enjoy an amazing story that is a well-written whodunnit romance filled with healing and faith then I highly recommend October Winds.