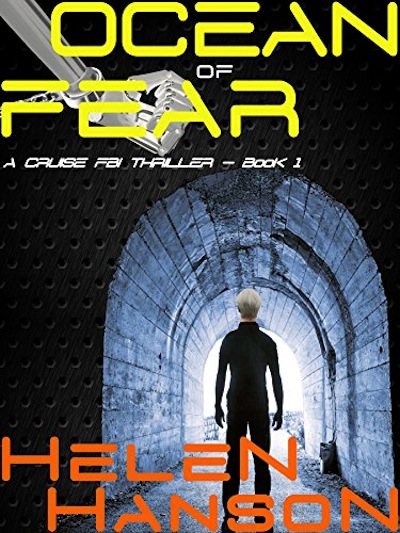 Helen Hanson writes a great thriller and it is always action packed. I had read the second book in this series (Spider Games) as an ARC and was so impressed I got Ocean of Fear, the first in the Cruise FBI series..I could hardly put the book down.

It will draw you in and the anticipation will have you as tense as a guitar string making the reader afraid of what was going to happen next. Baxter Cruise, robotics engineer and Special Agent Claudia Seagal of the FBI cross paths with members of the Venezuela drug cartel.

Baxter’s mentor and friend is missing and Baxter is kidnapped to finish what his professor started. He must create a robotic submarine. Ms. Hanson makes the book come to life and I believe her books would make an excellent movie

By You Can Call Me Lynn

This is a Techno-thriller mixed with Crime Fiction and Law Enforcement Procedural.

FBI agent Claudia Seagal meets Baxter Cruise, a grad student seeking a Masters in Robotics, after he discovers a dead female professor. There were some inconsistencies in the story he told the police and what he told her. Claudia wants to know what he is hiding, she didn’t realize that knowing the truth would put lives in jeopardy.

I really enjoyed how Ms. Hanson showed the various viewpoints. In particular, how Claudia and Baxter felt about each other despite their circumstances and being on opposites sides of the interrogation.

Helpful Hint: While not necessary to enjoy this story, I recommend reading the Masters CIA series before this as it will enhance your knowledge of some cross-over characters.

From California to Venezuela, this thriller moves along as the bodies pile up for Baxter Cruise. One day he’s a happy robotics engineering student making lots of money with a sketchy business, and the next day his professor is missing and another one is dead.

He meets an FBI agent and gets involved with a drug cartel. Helen Hanson knows her stuff and keeps this unusual story zipping along.