Daily Review: Do Not Go Gentle by C. A. Larmer 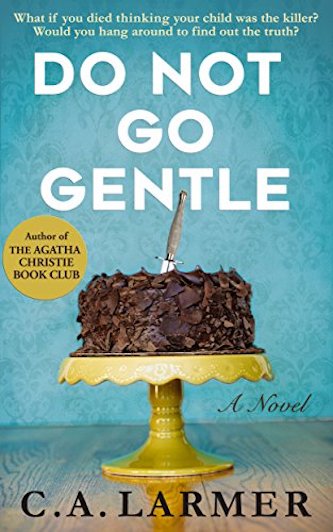 A heart-wrenching story of one woman’s quest to uncover the truth.

Lulu Gold has just been stabbed and is hovering above the crime scene, feeling pretty pissed off. Her dead grandmother is beckoning furiously from the tunnel but Lulu’s not going anywhere, thanks very much. Not until she uncovers who killed her and why… So begins the extraordinary story of one woman’s quest to uncover the truth before she is dragged, kicking and screaming, to eternity fearing her beloved boy is a killer.

In this lightly written yet deeply moving DIY mystery, readers are given all the clues to solve a baffling crime. Why did Lulu see her 13-year-old’s sneakers just seconds before she died? What has chocolate cake got to do with anything? And who—or what—is behind that evil presence lingering in the shadows?

From the best-selling author of The Agatha Christie Book Club, C.A. Larmer takes us on a drone’s-eye view of the crime scene and a journey back through conflicting memories to uncover what really happened. Will the truth set Lulu’s spirit free or destroy everything she ever knew about herself and her loved ones?

Sometimes hilarious, sometimes break-out-the-tissues sad, this story of love and loss shows us what it really means to love and how important it is to let go.

This stand-alone novel contains some Australian colloquialisms and a little adult language. No graphic violence or horror.

Lulu was dead – she recalled the slight feeling of pain in her back, then the darkness. But she wasn’t ready to join her grandma, who was beckoning toward the brightly lit tunnel. She wanted to know who murdered her; she wanted to prove her son Bob didn’t kill her. So Lulu enlisted the readers to help as they read along!

Lulu watched as the police arrived; the neighbors gawked; a few cried (she was impressed) – but mostly the shock on Bob’s face, the grief she saw. Lulu knew she’d been harsh with Bob when he’d played up before his thirteenth birthday. She couldn’t believe she’d canceled his party. Was it that? Or was it the chocolate cake she’d baked him then wouldn’t let him eat?

Well, that was a strange read! Do Not Go Gentle by Aussie author C.A. Larmer was nothing like her other novels, which I’ve thoroughly enjoyed. A light mystery; a quick read – it’s still a whodunnit with the usual twists and reveals – definitely different! But worth recommending

By The Cozy Review

This is a heart-wrenching story of one woman’s quest to uncover the truth. The reader is invited to help solve a murder and maybe save a boy along the way. Lulu is murdered in her own kitchen. The last thing she sees is a pair of black Converse sneakers. Do they belong to her son? Did he really kill her over a birthday cake?

If you thought your child had just killed you, would you want to know? In this gut-wrenching posthumous murder mystery, single mother Lulu implores the reader to help solve her murder before the granny-beckoning tunnel swallows her whole. With her dead Grandma beckoning furiously from the tunnel, Lulu is desperate to solve the mystery of her own murder before she heads off into eternity.

Christina Larmer is a talented storyteller and a gifted author. Do Not Go Gentle is as original as it gets with a plot that is easy to follow with a plethora of clues that are not easily figured out. Her writing flows with colorful details and realistic dialogue. Told from the view of the deceased this story is intriguing and entertaining.

The cast of characters ranges from Lulu, the victim who may not be all that likable at times, to kiss stealing grumpy teenagers, cheating ex’s, neighbors and so-called friends. Most don’t seem to care too much about the victim or who killed her.

They are a diverse group interspersed with realistic traits that either make you love them or hate them. There is no real hero, and the killer turns out to be someone the reader is unlikely to point at. There persists a sensation within the pages that everyone has a secret they fear will come out through the investigation into Lulu’s death. Their fears may well be justified as the investigation unfolds and the entire neighborhood is scrutinized.

The neighborhood setting is a small area that limits the victim’s movements and what the audience can see through her eyes but feels as if it spreads across the entire country. The homes are average, the kind you would see anywhere in the world. It is an archetypal neighborhood, with vast quirks and peculiarities.

Do Not Go Gentle is a wonderfully written highly entertaining book that will leave readers happy and sad at the same time. The story ends just a bit too abruptly, but this does not distract from the overall fun and enjoyment of the story. This book is highly recommended to lovers of the not so normal whodunit.

Please click HERE to find Do Not Go Gentle on Amazon.