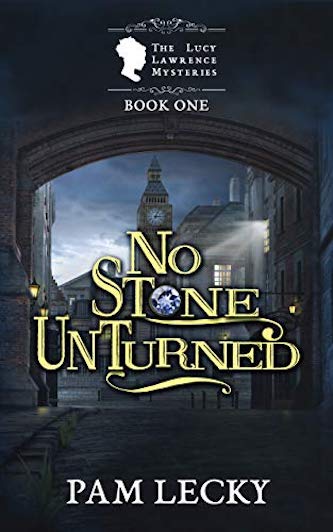 A suspicious death, stolen gems, and an unclaimed reward: who will be the victor in a deadly game of cat and mouse?

London October 1886: Trapped in a troubled marriage, Lucy Lawrence is ripe for an adventure. But when she meets the enigmatic Phineas Stone, over the body of her husband in the mortuary, her world begins to fall apart.

When her late husband’s secrets spill from the grave, and her life is threatened by the leader of London’s most notorious gang, Lucy must find the strength to rise to the challenge.

But who can she trust and how is she to stay out of the murderous clutches of London’s most dangerous criminal?

I really enjoyed this book!

The story opens with the protagonist, Lucy Lawrence, suffering a series of betrayals that would test anyone’s mettle, but she finds the courage to pick herself up and plot her way through a challenging mystery/adventure.

Lucy is strong, intelligent, and very much a woman of the Victorian era.

I look forward to the next installment and I hope it includes the intriguing Phineas Stone.

Try to keep pace with Lucy Lawrence on her quest to right the wrong her husband left upon his death. Jewels are missing, her husband dead, and no one knows where he hid them.

Follow Lucy as she untangles her husband’s hidden secrets as well as some familial problems of her own.

This was a terrific Victorian mystery that takes you from London to York and back as Lucy tries to find stolen jewels hidden by her husband.

But she isn’t the only one looking for them. Lucy Lawrence and Phinias Stone are memorable characters in a superb cast.

A must read for mystery as well as historical lovers. Highly recommend.

I was delighted to hear Pam Lecky was writing a book set in Victorian London as I enjoyed her earlier historic fiction and I’m a tad obsessed with that period in that city.

No Stone Unturned didn’t disappoint. It’s a pacy crime novel from the perspective of Lucy Lawrence, recent widow. After the sudden death of her husband she discovers he had oodles of secrets and debts.

Her family aren’t supportive and there had been little contact between them since she defied their wishes to marry, but they are her only hope.

Thankfully Lucy, despite her grief, has three things going for her – a plucky and loyal maid Mary (one of my fav characters), a determination to fix her own life, and Phineus Stone (an insurance fraud detective) who may, or may not, be on her side.

She needs all three as her disasters accummulate – her husband ran a scam mining company and his creditors are on her tail, her brother is interfering with the will, her husband is a suspect in a huge sapphire heist, and the criminal gang boss (Marsh) who was also involved believes she knows the location of the gems. She doesn’t.

Action moves between London and her family home in Yorkshire and the pace is perfect. It’s the first in a series and I will definitely get the next one.

Good for fans of London, detection, and female detectives/adventure.

Please click HERE to find No Stone Unturned on Amazon.