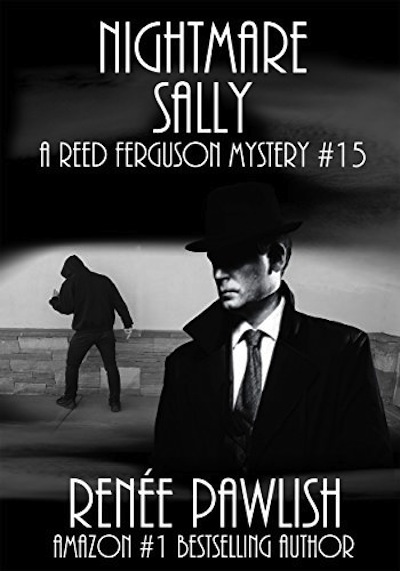 Reed finds a great deal more than he bargained for: lies, theft, murder, and shots in the dark.

Reed Ferguson’s latest case could be a nightmare!

When Brenda Evans asks private investigator Reed Ferguson to deliver a message to her estranged daughter, Sally, Reed thinks this will be the easiest case he’s ever had. Unfortunately, Sally has moved without leaving a forwarding address. When Reed eventually finds Sally, she happens to be the prime suspect in a murder. However, Sally claims she’s innocent, and Brenda wants Reed to prove it.

Reed’s investigation leads him through the seedy side of Denver, involving ex-cons, a masked social media personality, and back to Sally, who has secrets of her own. One thing is certain: danger is at every turn as Reed hunts for the killer.

Nightmare Sally is a suspense-filled mystery, with a Bogie-wannabe detective, a lots of humor, and a clever homage to film noir. From the award-wining author of This Doesn’t Happen In The Movies.

Great for fans who love a fast-paced, humorous read, without a lot of swearing or sex.

This is the 15th of the Reed Ferguson stories and somehow the author has not run out of ways to keep the series going. Reed is again called upon to help someone in need and finds there is more going on than what first appears.

Your regular supporting cast make appearances and one seems to be developing an even more rounded character. I think we will be seeing more of a certain female cop in future stories.

Well done Renee! You have managed to maintain an interesting storyline and keep reader interest without becoming repetitive. I find your progressive character development to be excellently managed. I anxiously await the opportunity for more of your stories. Thank you.

This time Reed’s mother, who is irritating in her incessant worrying, sends him a client that everyone agrees could not possibly present any danger. But of course, they’re wrong. His mother’s friend is in an advanced stage of cancer and wants to get in touch with her estranged daughter.

The daughter has dropped out of sight, but Reed is able to locate her using his investigative skills. Almost immediately after finding Sally, Reed discovers her boyfriend murdered in his apartment with Sally rummaging through his desk. The goofball brothers and Cal all help in his quest to find the motive as well as the killer.

This book is definitely a page turner that keeps the reader fully engaged till the end. A part of the plot becomes apparent, but the killer is certainly a surprise. However, it is not an off-the-wall, where did that come from conclusion.

Ms. Pawlish uses her masterful storytelling to create a marvelous mystery. I highly recommend this book, and even though it is a stand-alone story, it adds to the saga of Reed & Co. and is best enjoyed in order. The characters have become friends that you look forward to catching up with in the new year.

I am not familiar with the noir film “Nightmare Alley”, but I really enjoyed reading “Nightmare Sally.” Sally is an aspiring musician who seems to leave a path of chaos and lies behind her. She is also the daughter of Reed Ferguson’s new client, who, having learned she has cancer, wants Reed to find Sally.

Reed finds a great deal more than he bargained for: lies, theft, murder, and shots in the dark. The plot twists kept me reading just one more chapter and I could not put it down until the end. I have read all of the Reed Ferguson series, and the stories are still engaging, tense, and occasionally humorous.

I regularly recommend them to my friends.

Please click HERE to purchase your copy of Nightmare Sally on Amazon.