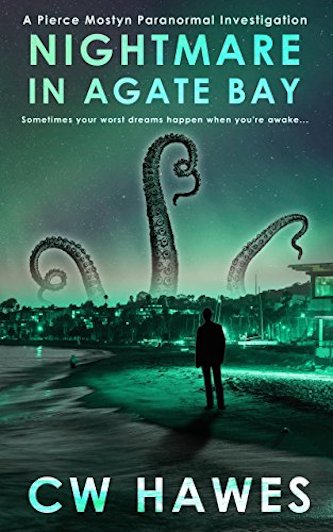 It is fast-paced and once you begin to read it, you are sucked right into an action-driven storyline that holds you captive to the end.

They’re staging a comeback. And they want us out of the way.

There are rumors that an ancient evil has resurfaced in the decaying Lake Superior town of Agate Bay.

Pierce Mostyn, special agent with the ultra-secret Office of Unidentified Phenomena, is tasked with finding out if the rumors are true. If they are, Mostyn must take appropriate action to contain or eliminate the threat.

When he and his team arrive in Agate Bay, they find a virtual ghost town. The few remaining inhabitants quickly show themselves to be hostile and threatening. And they appear to be suffering from some manner of a strange disease.

However, when Mostyn and his team finally discover the truth, can they get out of town in time to save the world? Or will they too become part of the hideous nightmare in Agate Bay?

Nightmare in Agate Bay is the first installment in the new series that explores those secrets too secret for even the X-Files. If you’re a fan of HP Lovecraft, Brian Lumley’s Titus Crow, Charles Stross’s The Laundry Files, and the Cthulhu Mythos, you’re sure to like this new paranormal adventure series.

Begin the adventure today — if you dare!

CW Hawes, author of the fantastic ‘Rocheport Saga’, has done it again putting together a well-crafted story that slowly builds in tension.

Trust me, you won’t want to put it down!

Hawes has managed to capture that Lovecraftian atmosphere that so many get wrong, superbly managing to weave a contemporary thread to the shadowed tapestry of the past. Bravo indeed!

This promises to be a great new series and having finished the book I am already eager to follow Special Agent Pierce Mostyn’s further adventures as he and his team peer into the abyss!

Who ya gonna call…Monster Busters, of course! I just finished reading Nightmare in Agate Bay by CW Hawes and though it isn’t my usual genre, I found it thoroughly entertaining.

The story begins in Agate Bay where a paranormal team, led by Pierce Mostyn have come to investigate strange happenings that have been reported in the town.

Hawes has written a fun, satisfying paranormal novelette. It is fast-paced and once you begin to read it, you are sucked right into an action-driven storyline that holds you captive to the end. And remember to keep looking over your shoulder because you never know… “It was hideous, sir, hideous beyond description.”

“Nightmare” is the first in CW Hawes’ original series featuring Pierce Mostyn, agent for the Office of Unidentified Phenomena. OUP investigates anything dealing with weird occult events or transdimensional creatures.

In this, Mostyn’s first outing, Mostyn and his team are sent to a fishing town where the locals speak weird and talk even weirder. If you’ve read HP Lovecraft’s A Shadow Over Innsmouth, you’ll immediately recognize that Hawes is paying homage to the story here.

“Innsmouth” happens to be my favorite of Lovecraft’s works, so I readily caught everything and liked all the references to it. It ultimately becomes a case of Lovecraft meets “The X-Files.”

It’s a good first read and a fun adventure. Action really kicks off at the end, starting with a shootout and ending with a visitation straight out of the nightmares of the Necronomicon.

Lovecraft or adventure fans, or both, definitely take note here!