Daily Review: A New Place, Another Murder by Christa Nardi 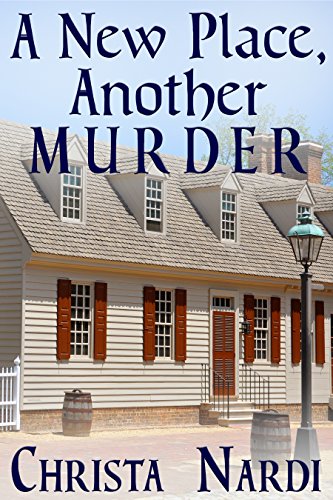 Will the truth come out before the person calling the shots takes Sheridan and Maddie out of the picture?

Sometimes you need to be careful what you wish for.

Pretty much settled into her new home in Appomattox with Brett and his daughter, Sheridan longs for something to keep her busy.  That is until Maddie and her new friend are framed for theft and murder.

Not quite the distraction she had hoped for, but she’ll turn over every rock to prove their innocence.  In the process, she learns about the powerful Buchanan family and the history of the local community.

Will the truth come out before the person calling the shots takes Sheridan and Maddie out of the picture?

Dr. Sheridan Hendley has married her love, and become a new Mother to her husband’s daughter. To make life easier, they moved into Brett’s condo. The three are enjoying the new married life, when, one day, daughter Maddie comes home in distress.

It seems the young man in ‘camp school’ that has befriended Maddie, has been accused of stealing school money and Maddie, herself, is implicated. Sheridan takes quick steps with Brett to clear her new daughter’s name. Not quick enough it appears as the bullying morphs into physical danger for the entire family of McCann’s as well as the young friend’s family.

This gentle cozy has some startling scenes written in. An excellent beginning to a new series.

This spin-off of Nardi’s Cold Creek mystery series has the newly-married Sheridan Hedley moving to Clover Leaf in Appomattox County and into her husband, Brett McMann’s three-bedroom condo. Things are going well for Sheridan, Brett, and his daughter, Maddie. Maddie’s in assorted camps to help her settle into her new digs before school starts, and Sheridan is volunteering at a local animal rescue, and looking for a job.

She’s a little at loose ends because she misses her old job at Cold Creek College, and she hasn’t been in town long enough to make any friends. Trouble seems to find her anyway when Maddie and her new friend Alex are accused of stealing money from one of the camps.

Then a body turns up and Alex is in even more trouble. He’s from the wrong side of the tracks, and the dead guy is connected to one of Clover Leaf’s oldest, richest families, so the police don’t appear to be too interested in finding other suspects. Maddie begs Sheridan to help uncover the truth.

Brett, a state police officer, has to stay away because he’s out of his jurisdiction and Maddie is involved, so Sheridan is on her own.

I am occasionally reluctant to read an author’s new work in case I don’t like it as much as I do the previous series I am familiar with. But this spin-off didn’t let me down. Nardi brought along the characters I loved from Cold Creek (Sheridan, Brett, Maddie, and Charlie, Sheridan’s Sheltie) put them in new situations, bring new life to the characters. I also liked that Sheridan keeps in contact with former colleagues at Cold Creek College. This made Sheridan seem even more real to me.

This was a clean mystery – and by “clean,” I don’t mean boring, preachy, and relentlessly perky, I mean most of the violence occurs off screen, there’s no profanity and no intimate details. I usually like some grit in my mysteries, but I didn’t miss that here.

I particularly like how Sheridan treats Maddie, not like some bobble-headed teen, or as a threat to her new marriage, but with respect and affection. I also appreciate that Brett doesn’t poo-pooh Sheridan’s need to solve mysteries, but rather values her contributions to solving cases. And Sheridan doesn’t take stupid chances as in some mysteries, which is refreshing.

I hope there will be more adventures for Sheridan, Brett, Maddie, and Charlie.

Please click HERE to find A New Place, Another Murder on Amazon.