Daily Review: My Name Is Grace by Carol Braswell 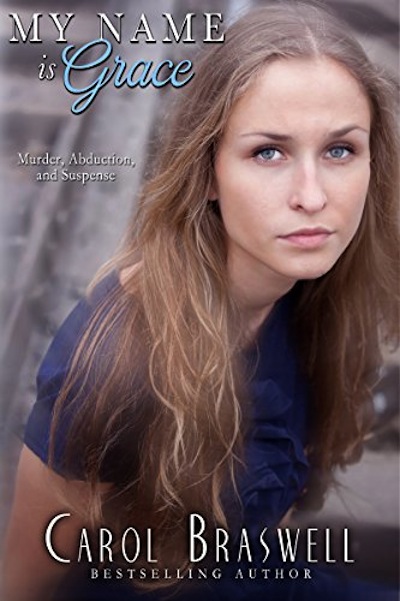 My Name Is Grace is an engaging romantic mystery story with interesting and believable characters.

It’s dark, rainy, and cold. A hard rail pushes into her cheek, leaving an indentation. A loud whistle penetrates the night, startling her awake. Shifting rocks puncture her elbow and knees when she tries to sit up.

A light flashes in the distance as the whistle sounds again and the light moves closer. Her eyes widen. She’s laying on a railroad track and there is a train barreling toward her. She must move.
The young woman rolled away from the tracks just in time and set out to learn her identity. She has no knowledge of how she got on the tracks, who beat her up, or her own name until she finds the necklace hanging around her neck.

Grace follows the tracks to the small town of Weber, Texas, where she encounters the small town sheriff, Chris Wallace. The sheriff sets out to learn not only her identity but who had abused her. What he learned not only surprises him but it devastates Grace.

The truth is so hard to bare she has to see for herself and find the missing pieces of her life. A move she should have let Sheriff Wallace assist her with instead of confronting her attackers herself.

A woman wakes up on a train track in the rain with a train barreling toward her. She dodges out of the way just in time. She’s bruised and cut with two black eyes, her clothes are torn and dirty, and she doesn’t remember who she is or how she got there.

But she’s wearing a necklace with the name (or word?) “Grace” on it, and she’s got a thick roll of cash in her pocket. This is how Carol Braswell’s fast-paced novel My Name Is Grace opens.

Soon, Grace discovers she’s in the town of Weber, Texas (population 2,046). Sheriff Chris Wallace finds her and calls a doctor, who examines her and finds that’s she’s recently given birth. Grace has no memory of this, the baby, or where the baby is now, just like she can’t remember anything else.

Whenever she sleeps, nightmares plague her, giving glimpses into what happened to her, as the sheriff and Grace struggle to solve the mysteries of who she is. Was the baby stolen? Did Grace abandon it?

My Name Is Grace is an engaging romantic mystery story with interesting and believable characters. The story builds in an enjoyable way as clues are discovered and more mysteries are presented which kept me reading. Braswell’s writing is clear and strong.

Fans of romance and mysteries will enjoy this book.

Carol Braswell paints a vivid picture of mystery and real horror in her book My Name Is Grace. Not only does Grace lose her memories due to the trauma of her abduction, but she loses people very dear to her in the process.

The story builds around the character, Grace, who awakens beaten, bloodied, and with no recollection of her past. She’s taken in by the kindhearted sheriff, Chris, beginning the twisting narrative between the two.

As Grace struggles to recover her lost memories, Chris works on unraveling the mystery surrounding the young woman. Is she the victim she claims to be? Or is her story much worse than Grace can even imagine?

Braswell’s storytelling is quick and focused, leading from one page to the next, and one chapter to another. Her words flow easily enough, although at times the writing felt a little rigid, almost like watching a play that had been over rehearsed.

Still, the mystery behind Grace’s past, the investigation, and the compelling characters hold this story together well. If you’re looking for an invigorating weekend read, something to keep you guessing, My name Is Grace may be the perfect book for you.

Please click HERE to purchase My Name Is Grace from Amazon.