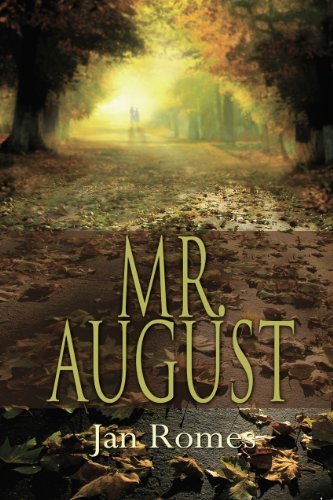 A witty, heartwarming romance with colorful characters and a fun, fast-paced plot.

Fashion designer Libby Griffin has had the week from hell–terminated from her job and heart-wrenching news from the doctor. Hoping for time alone to regroup, Libby rents a cabin on Grand Lake St. Mary’s for five months. Right away she meets the most irritating man on the planet, who also happens to be drop-dead delicious.

Recently divorced author Maxwell August has a book due, and his muse has gone into hiding. With a chip on his shoulder, his writing in stuck-mode, he heads to the lake only to encounter a monumental distraction with blonde hair and hazel eyes.

Will these two right-brainers allow the off-the-charts attraction brewing between them to grow? Or deny it to focus on the things they think are more important and miss a chance at forever?

What can I say about Mr. August? Or maybe I should call him Mr. Crabby, Mr. Dummy or Mr. Go Away. Nah, I think I will just call him Mr. Yummy, because regardless of his issues and his sometimes less than brilliant actions Maxwell August is rather yummy.

When Libby Griffin rents the cabin next to his, she thinks so too. Too bad she’d been warned to steer clear of him and leave him to his task, finishing his book. That was just fine with Libby, she was at the cabin to nurse her own wounds and certainly didn’t need a grumpy man to deal with.

But Libby has curiosity like a cat and when she sees Max, and his cute dog, she makes the mistake of trying to “get friendly” with the pup. Much crabbiness ensues when Mr. August tries to do everything he can to keep Libby from penetrating his world. What happens next is what kept me up until 1 a.m.!

Jan Romes always writes stories that are fun, steamy, but yet they make you think. She wove a story of the importance of never discounting yourself, always following your heart and NEVER assuming. I love Jan Romes and her fun stories and highly recommend Mr. August or any of the other titles she has.

When you’re looking to stay tucked up in bed until late into the night with a fantastic book, Ms. Romes, is your gal!

Fashion designer Libby Griffin is hiding out for the winter at a lake cabin to lick her wounds and concentrate on her design career. Not only has her friend and employer fired her, but she’s learned some bad news from her doctor. As hard as it is, she’s going to try to push away the past and look forward to starting over.

Then enters Mr. August from the cabin next door. Maxwell August is a bestselling author who has to finish his latest novel and get it to his publisher on time. He locks himself away in the cabin next door to Libby to work and not be disturbed. Except the sight of Libby disturbs him completely—in a good way. But he’s not looking for a romantic encounter any more than Libby is. Unfortunately, they are finding it hard to resist each other.

Once again, Jan Romes has written a witty, heartwarming romance with colorful characters and a fun, fast-paced plot. Libby has her own sense of style while Max is more conservative, yet somehow he finds he cannot keep his mind off of her.

Through a series of mishaps, they find themselves both fighting with each other and unable to keep their hands off of each other. I liken Ms. Romes romances to the witty romances written by Janet Evanovich before she became famous for her Stephanie Plum series.

Cute, fun, sometimes crazy, and definitely endearing. You can never go wrong with a romance by Jan Romes.