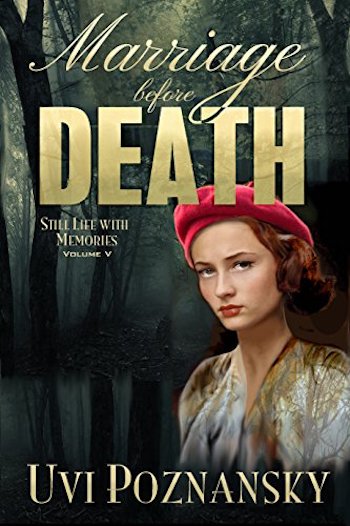 In so many ways, our inner wars are so much more painful than any “outer” war, and this is the core of what readers feel as this story unfolds.

After D-Day, her photograph appears on the most-wanted Nazi propaganda posters.

Who is the girl with the red beret? She reminds him of Natasha, but no, that cannot be.

Why does Rochelle step into his life when he is lead by SS soldiers to the gallows?

At the risk of being found out as a French Resistance fighter, what makes her propose marriage to a condemned man?

I would follow Uvi Poznansky anywhere, and, joy! Now she’s written a World War II thriller intertwined with an unusual, powerful love story. Marriage Before Death is the fifth in the author’s Still Life with Memories series about Lenny and Natasha Kaminsky, war heroes. I’ve loved every one.

Lenny, in the present, is remembering the couple’s terrifying time in France, in 1944 in the long weeks before D-Day. Lenny’s pain is that Natasha now is suffering from Alzheimer’s. He tries to get her to remember when they were separated for a time: he was caught out of uniform and facing execution by the Germans; Natasha had disappeared into the French Resistance to help both the Resistance and the Allies.

The story of how they survived such horrors is extraordinary. Also extraordinary is the author’s deep and gorgeous writing, interweaving desperation with descriptions of “beautiful light streaming from high-arched, stained glass windows, rattling in the duel between the German artillery and ours.”

These are the memories that Lenny aches to remember with Natasha, as her disease intensifies and she struggles against it. In so many ways, our inner wars are so much more painful than any “outer” war, and this is the core of what readers feel as this story unfolds.

I truly loved this story and recommend it – and the whole Still Life with Memories series. Five stars!

Ms. Poznansky has done it again, but this time—and I don’t say this lightly—she has written my favorite book to date in her stable of literary gems.

Marriage Before Death continues in the Still Life With Memories series, which paints stories of the lives of Lenny and Natasha Kaminsky. (Book 1: My Own Voice, Book 2: The White Piano, Book 3: The Music of Us, Book 4: Dancing with Air)

In this story, Ms. Poznansky eloquently shifts from her previous genre of literary stories full of romance, to a wartime suspense story, still, however, continuing with the love story of our beloved couple.

I have always adored Ms. Poznansky’s evocative writing, but this time she whisked me into the era of WWII French Resistance Fighters in 1944. And what an adventure it was! I trembled in my virtual boots beside Lenny when he was captured by Nazi soldiers, “this close” to being executed.

He stood in a line of captured soldiers and resistance fighters, waiting to be sent to one group or the other. One group would be immediately hanged on the gallows that loomed nearby, the other would be used in some fashion to help the Nazi cause. The tension was riveting.

I listened to the audiobook version of this fascinating story, told by the talented Mr. Don Warrick. His male character voices are outstanding, and his accents—whether it be British, French, German, Jewish, or American, the rendering is brilliant and on target. The female voices aren’t quite as effective, in my humble opinion, but honestly, one can’t fault a deep, stentorian narrator for not being able to completely sound like a woman.)

Thank you, Ms. Poznansky, for allowing us to continue to believe that America still produces great writers who judiciously craft each sentence, and who can tell a great story at the same time.

Please click HERE to find Marriage Before Death on Amazon.