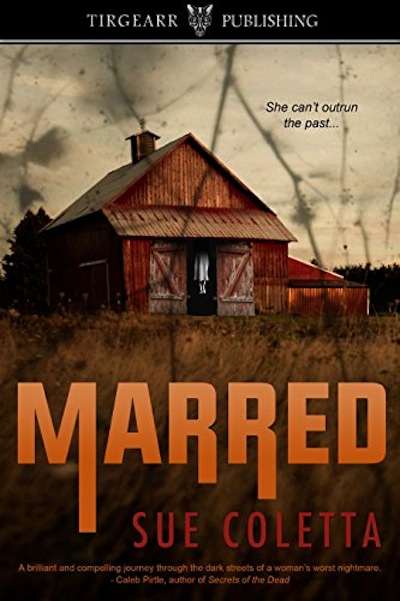 I enjoy thrillers that surprise me and Sue Coletta has definitely managed that with the unpredictable turns and developments that I did not see coming.

Marred is a nail-biting serial killer thriller that, once started, was hard to put down. You immediately feel drawn to the protagonist, Sage Quintano, who writes books about crime for a living and has experienced a horrendous crime herself. A vicious assault has left her struggling with everyday life.

Her marriage to Niko, a homicide detective, is suffering as a result of the experience and because of secrets she has been keeping from him. Moving to a rural area in order to heal and rebuild their lives, Niko takes on the position of sheriff and becomes involved in the search for a serial killer who leaves his female victims’ bodies marred and displayed in a gruesome manner.

Then Sage’s twin sister disappears, and everything suggests that Sage’s assailant has followed her from Boston to New Hampshire to finish what he started years ago.

Told from Sage’s first person point of view and alternating with chapters in the third person from Niko’s and Frankie’s (the deputy sheriff) viewpoints, Marred is an intense and suspenseful thriller.

The vivid descriptions of the settings and the information on the forensics were fascinating. This author knows her stuff and has a very engaging style of writing and creating dialogue. I enjoyed the different points of view and particularly liked Frankie, Niko’s deputy, whose viewpoint introduced a slightly lighter side to an otherwise very dark and scary story.

I enjoy thrillers that surprise me and Sue Coletta has definitely managed that with the unpredictable turns and developments that I did not see coming. The ending left potential for a sequel, and I will certainly seek out future publications by this author.

For three years mystery author Sage Quintano and her sheriff husband, Niko, are shells of their former selves. A brutal knife attack against Sage caused a miscarriage, a permanent scar on her jugular and knee damage. When Niko went after the assailant, he caught a bullet to the shoulder which flairs up, but his biggest problem is like hers, the emotional devastation.

They moved from Boston to a small town in New Hampshire and did not leave a forwarding address. Sage answers the phone and recognizes the voice of the masked man who attacked her and guesses that leaving a phone number with a hospital led him to her. The brute asks her if she wants to live forever.
In their new town Sheriff Niko Quintano investigates a murder in a barn. He has to put up with associates and underlings of the country bumpkin variety. His partner Frankie has no professionalism, but his ex-military new addition, Ben Matthews, takes orders.

The MO is similar with cigarette burns to an eighteen-year-old’s feet. Breasts and eyes were removed with black threads in X’s sewn in skin. A pulley system was used to hang the bloody, decomposed body as if she is a flying angel in the barn. The killer does not necessarily have to be strong because the pulley system offers a mechanical advantage.

Sage recognizes the clues when “her husband’s heart breaks” and decides to snoop in his briefcase. Confronted by Niko who sees papers from his file strewn about, Sage offers to help. They joke about “the kids” not telling. The kids are their dogs, a mastiff and Rottweiler.

During that morning Sage and Niko bond over the case, but he doesn’t want her involved. When Sage receives a phone call from the serial killer telling her he has her twin sister, Chloe, she draws upon every shred of strength. The killer wants fifty thousand dollars and commands her to write a book about him. Sage immediately drives to Boston to meet and share her dilemma with her agent, Jess, who agrees to give her an advance.

What clues does the killer spill? Once I started reading Marred, I couldn’t put it down. I worried about the trap being set for Sage, the angel that got away. I highly recommend Marred to all my friends, particularly those who love mysteries.