Daily Review: The Many Colours of Us by Rachel Burton 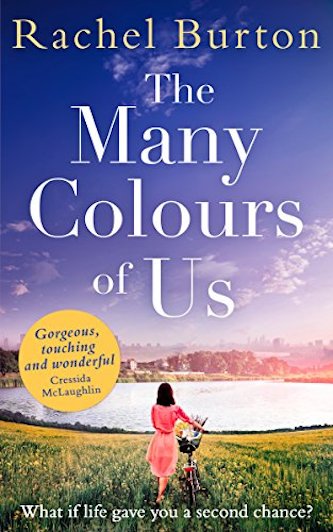 A beautiful story about family, secrets, selfishness, selflessness, and how the past can influence the future.

Julia Simmonds had never been bothered about not knowing who her father was. Having temperamental supermodel, Philadelphia Simmonds, as a mother was more than enough. Until she finds out that she’s the secret love-child of the late, great artist Bruce Baldwin, and her life changes forever.

Uncovering the secrets of a man she never knew, Julia discovers that Bruce had written her one letter, every year until her eighteenth birthday, urging his daughter to learn from his mistakes.

As Julia begins to uncover her past she also begins to unravel her future. With gorgeous lawyer Edwin Jones for company Julia may not only discover her roots but she may just fall in love…

I loved this book. Seldom have I read one where the main character has traits which were so near and dear to my heart. Julia is a 30-year-old unmarried paralegal whose life is being used up one day at a time, and not happily. I have to say my life has been the same, though I am far over 30. We find out that Julia has few friends; I have none really. I have acquaintances.

Julia never knew her father, thanks to her mother’s instructions and refusal to even say his name. I never knew my father, who walked out on us (me, really) when I was six months old. The author’s description of Julia never feeling like she fit in anyplace struck home with me. Julia had her running time and her sewing as her main pursuits; I have my reading and sometimes, writing. Julia finally finds out her father’s name and the fact that he died, not so very long ago.

She reads letters he wrote to her every birthday, but which her mother kept her from knowing about. Julia’s father was an alcoholic, just like mine. Her father was a famous artist who left her everything he owned. She strives to earn this regard by using some of the money to set up an Arts Community Salon in her father’s name. In so doing, she becomes more friendly with her mother and meets new people. She finds her sewing to be her artistic niche and capitalizes on it.

She meets and falls in love with the attorney who told her about her father and who gave her his letters. He also helped her come to terms with the riches now at her disposal and with setting up the Art Salon, and in so doing, grants a wish of her father’s, expressed long ago in one of his letters. I couldn’t put this book down!

Julia’s mother never wanted to tell her daughter about her father. Julia only finds out about him after his death when she receives a message from his lawyer. Julia’s mother used to be a supermodel and Julia now knows her father was a famous artist, but that is all the information she has. The only way for Julia to find out more about her father is by reading his letters. He used to write her every year on her birthday and fortunately most of the letters are still there.

Slowly Julia finds out more about her background. By asking questions about her father she discovers she’s missed a large part of her family’s history. Many of the people she loves apparently know more about him and were even close to him, but they were never allowed to speak about him. Julia has been deliberately kept in the dark. The question is why? Will she be able to forgive her mother for what she’s done by not allowing her daughter to meet her own father?

The Many Colours of Us is a fascinating story about a woman who was always missing something in her life. Julia was curious about her father, but her mother didn’t want to say a word about him. Unfortunately, Julia doesn’t have the chance to get to know him any longer, but she wants to gather as much information as she can. I loved how kind and forgiving she is. She hardly ever lashes out, she doesn’t let her anger control her actions and she tries to understand the people who kept this huge secret from her. I think her attitude is admirable. It gives the story strength and it also makes it extra interesting. Julia observes, she lets people speak and she tries not to judge them. She also makes sure she gets something positive out of a difficult situation. She’s a wonderful person and that’s what I loved the most about The Many Colours of Us.

Rachel Burton has written a beautiful story about family, secrets, selfishness, selflessness, how the past can influence the future, fears, commitment, and creativity. I was captivated from the beginning and read the story in one sitting. I was curious to find out more about Julia’s parents, they’re complex and therefore very interesting people. Rachel Burton’s detailed descriptions of emotions, reasons to act in a certain way and different types of love are fantastic and they are making her story come to life incredibly well. I absolutely loved The Many Colours of Us, it’s a really special story.

Please click HERE to find The Many Colours of Us on Amazon.