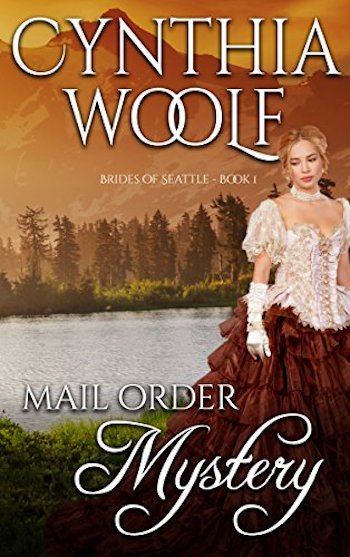 A wonderful well-written western with a dose of mysterious intrigue.

Civil war devastated the country and left Rachel Sawyer stranded in a dead-end job as a seamstress with no prospects for marriage. Men are thin on the ground in Massachusetts, so Rachel and her best friend travel west, to Seattle, with the handsome Talbot brothers. Jason Talbot, the eldest brother and wealthy owner of a lumber company, is so far beyond her reach that falling in love with him is the most non-sensical thing she could do. So, of course, she does. But after one sensual midnight encounter, Jason pushes her away.

Jason Talbot and his brothers are desperate to keep their lumberjack crews happy. And if that means traveling across the country to escort a hundred women to Seattle as mail-order brides, that’s what he’ll do. The brides are for other men. After losing his wife ten years ago, he’s not interested in risking another devastating blow to his heart. When Rachel catches his eye, his head and his heart are at war, and he’s not sure which side will win.

But when a thief springs up in their midst, and Rachel’s determination to solve the mystery leads to murder, Jason realizes he’ll do anything, not just to protect her from a killer, but to win her heart.

It was so nice watching Rachel and Jason falling in love right from them seeing each other among the 100 mail order brides in the church his sister arranged to meet them.

Then to watch it grow while on the ship for the three months it took to reach Seattle. Read what happened on the ship. Then see how they were drawn together shortly after arriving in Seattle.

Rachel and her best friend were trying to figure out who was involved in the theft of the bride’s jewelry. It turns horribly bad when one of the women is murdered and another one is kidnapped.

Will Jason ever admit he is in love with Rachel or will he continue to mourn his late wife who died ten years ago? Do they have a chance at real love or will Rachel have to walk away?

I was very impressed with this story and hope the next one is about Drew and Lucy. I hope he can help her recover.

Please get this wonderful book and read it for yourself to find out everything that happens in Seattle. I highly recommend this book and I just know you will like it too just as much as I have.

Seattle 1864 and the men of the lumberjack mill run by the Talbot brothers are looking for mail order brides. Jason and his brothers have promised to bring back 100 women from Massachusetts. But only for his men possibly his brothers but not for him. He buried his heart along with his wife Cassie when she died in childbirth. When he meets Rachel Sawyer he’s instantly smitten with her.

Rachel Sawyer is finally looking forward to starting a new chapter in her life.

Her fiancé went to war and never came back with her friend Lucy they take the plunge for a new life a husband and family. When certain pieces of jewelry go missing from the women Rachel is certain she can solve the mystery, even though she’s lost her heart to Jason. Finding the thief seems easier than fighting a dead woman for Jason’s love. When danger strikes Jason realizes that he can’t lose the woman that has his heart from the beginning.

A wonderful well written western with a dose of mysterious intrigue, keep you turning the page in this Who dun it romantic mystery. I truly enjoyed Jason and Rachel’s romance she was not going to wait anymore she saw Jason and pursued him Jason just needed a push in the right direction, the secondary characters Adam and Karen Martell were interesting as well. Can’t wait to read their story. Loved this tremendously, highly recommend.