Daily Review: Living in the Shadows by Judith Barrow 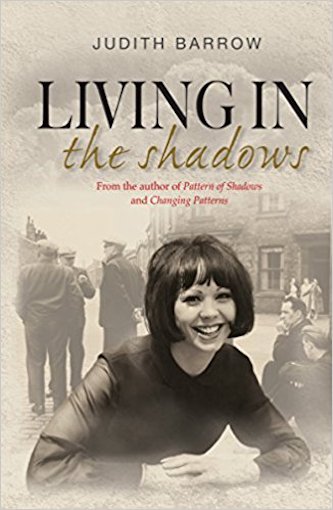 Who is this man, and why does he scare her so?

Sequel to the acclaimed Changing Patterns and Pattern of Shadows.

It’s 1969 and Mary Schormann is living quietly in Wales with her ex-POW husband, Peter, and her teenage twins, Richard and Victoria. Her niece, Linda Booth, is a nurse – following in Mary’s footsteps – and works in the maternity ward of her local hospital in Lancashire.

At the end of a long night shift, a bullying new father visits the maternity ward and brings back Linda’s darkest nightmares, her terror of being locked in. Who is this man, and why does he scare her so?

There are secrets dating back to the war that still haunt the family, and finding out what lies at their root might be the only way Linda can escape their murderous consequences.

I loved the first two parts of this series so was delighted when a friend bought me the final book in glorious paperback as a present. Living in the Shadows, like the rest of the series is quality through and through.

This part is set in the late 1960’s and Mary and Peter Schormann are living a quiet life in Wales with their nearly grown-up children, Richard and Victoria, who are at that late teenage stage where good and bad decisions are made over the choices that lie before them. Despite being twins, they are very different. Richard is studious and steady aiming for a career in medicine whereas Victoria is much less settled and causes a lot of distress by running away with the romantic idea of joining a hippie commune.

Mary’s niece, Linda Booth, is working in a hospital as a nurse but an altercation with the husband of one of her patients awakens the past and secrets dating back to the war come back to haunt the present.

This author doesn’t rely on the image of the swinging sixties as a happy hippie time of peace and free love but shows the darker side, the side not viewed through rose-tinted glasses I suppose. Therefore, homophobia, domestic violence and the more sinister view of hippie communes all feature and help to paint a more realistic feel to that time.

However, there is something that happens in this story that is utterly heartbreaking. You almost see it coming and you want to turn away, to make it stop, to hope it all turns out okay but there is nothing that you can do to prevent the inevitable and I have to admit to finding I had a little something in my eye at that point. So sad…

Anyway, this is a totally compelling and absorbing series to get into and if you love excellently written family sagas with terrific characters and real life stuff going on then you will love these.

I was looking forward to reading the third part of Judith Barrow’s warts-and-all saga about the working class Howarth/Booth/Schorrman family living in Wales and northern England. The first part took place in WW2, the second in 1950, and Living in the Shadows takes us into the next generation, in the late 1960s.

These books are very much an everyday story of ordinary people, a bit like listening to The Archers or watching Emmerdale Farm before it lost its ‘Farm’; I’m sure someone makes someone else a cup of tea every ten pages! They will hold a great nostalgic appeal for those who have lived through these times in similar circumstances, which explains their popularity. But they’re more than just a real-life drama; Judith Barrow has a clever and subtle way of showing the attitudes of the time amongst Mr. and Mrs. Average, rather than giving them a gloss, like a nostalgia programme on TV; this, for me, is their greatest strength.

So, the 1960s… it wasn’t all free love, Union Jack minis, and Twiggy; the atmosphere of the war years of the 1940s and the struggle back in the 1950s prevailed. The extended family in this book come face to the face with scenarios of the type that were brushed under the carpet fifty years ago, ie, homosexuality and domestic violence.

The storyline I found the most interesting was that of eighteen-year-old Victoria, who experienced the sinister side of the hippie movement; it shows how young people, eager to take on new trends, can be manipulated and taken advantage of. Oddly enough, I had only recently watched a few TV programmes about Charles Manson and his strange commune of brainwashed young women; Victoria’s tale rang all too true.

As for the older members of the family, the loss of one of them near the end made me feel very sad, even bringing a tear or two to my eye; this bit was very well written indeed. I suspect this is not the last we shall see of this family!

Please click HERE to find Living in the Shadows on Amazon.