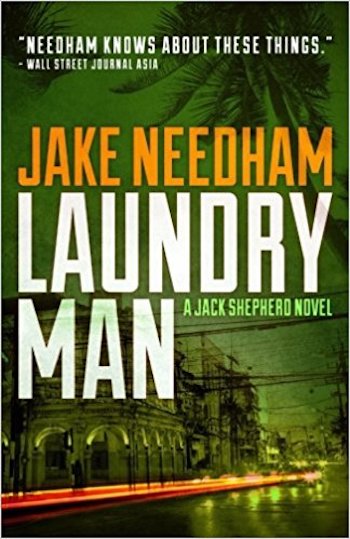 The characters are truly fascinating. They are so real, so colorful, and frequently so terrifying.

Once a high-flying international lawyer, a member of the innermost circles of government power, Jack Shepherd has abandoned the savage politics of Washington for the lethargic backwater of Bangkok, where he is now just an unremarkable professor at an unimportant university in an insignificant city.

A secretive Asian bank collapses under dubious circumstances and a former law partner Shepherd thought was dead reveals himself as the force behind the disgraced bank. Coerced into helping his old partner track the hundreds of millions of dollars that disappeared in the collapse, Shepherd follows a twisting trail of deceit from Bangkok to Hong Kong and eventually to an isolated villa on the fabled island of Phuket where he confronts the evil at the heart of a monstrous game of international treachery.

A lawyer among people who laugh at the law, a friend in a land where today’s allies are tomorrow’s fugitives, Jack Shepherd battles a global tide of corruption, extortion, and murder that is about to destroy the new life he has built for himself in Thailand.

Laundry Man kept me engaged as I followed Jack Shepherd through Bangkok’s infamous small sois (streets) inhabited by “unique” personalities both Thai and foreign. There is no city on earth quite like Bangkok and Jack Shepherd deftly navigates through the smoke and mirrors like no other expat can.

Laundry Man is so authentic because author Jake Needham is the real deal- an American expat intimately familiar with Thailand. Trust me, I lived in Thailand for nine years and after the first chapter, waves of familiar memories flooded over me, invoking the street sounds, cooking aromas and general rush I personally experienced there.

Make sure you are comfortable when you first open this book- because you won’t put it down unfinished.

Laundry Man is one of the Jake Needham books I sought for years. In those years I read a lot of very positive reviews. Now I can confirm that all the good things I have seen written about it are true.

The characters are truly fascinating. They are so real, so colorful, and frequently so terrifying. A good example is Archie Ward, the “pathologically profane Aussie.” It is great fun when he and Jack are talking deadly serious stuff while taking a wild round-trip ride on the Star Ferry across Victoria Harbor in Hong Kong.

I have never been to Hong Kong, but I may have to go there to see if I can make that same wild end run Jack made as the gate to the ferry was closing. Hope I can still move that fast. And then there is Mango Manny (Emmanuel Marcus), a man to fear even when he is on your side.

One of the best examples of the clever dialogue found in this book occurs in the first few pages. Jack Shepherd receives a call from an old law partner who has been dead for years. The conversation is clever, humorous, and intriguing. Use the Look Inside feature to read this exchange, and you’ll be hooked.

The plot is complicated enough to keep you guessing. If you are a person who likes to guess what comes next, you may find this plot quite challenging. I finally just quit trying and enjoyed the ride.