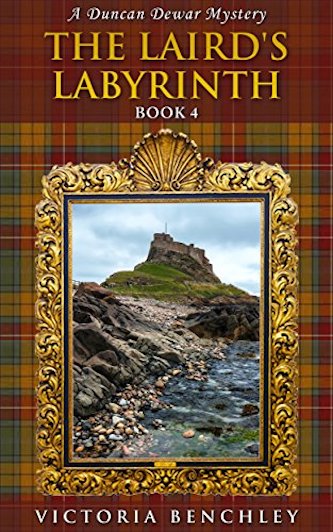 Another superbly researched mystery filled with informative historical background that kept me captivated.

By all accounts, Lindisfarne Island in Northumberland is a special place. For more than a thousand years, visitors have sensed The Other there, more so than anywhere else.

The veil between the physical and spiritual realms is known to be thin on Holy Island, an isolated spot cutoff from mainland England twice a day by the North Sea.

When Scottish detective Duncan Dewar agrees to solve an age-old mystery on the island, he has his doubts. Discovering clues hidden in an ancient labyrinth at Norcroft Manor and uncovering an almost century-old murder could get him killed.

Will he meet the same fate as his predecessor or discover an early monastery’s hidden riches? Follow Duncan as he explores England’s Cradle of Christianity while navigating romance, family relationships, and his latest nemesis, Viking.

I really enjoy the Duncan Dewar Mysteries. I’ve read them in order, and The Laird’s Labyrinth is the 4th in the series. It’s what I’d call a cozy mystery with a fairly predictable outcome. It’s an easy, quick read that’s well written.

I love Benchley’s characters as they have vibrant personalities and are mostly people I feel I’d want to get to know. Duncan is a very likable type, tall and handsome but humble with strong ties to his family. He doesn’t have too much luck with women although in this book a love interest emerges that might be around for a while (at least I hope so).

Victoria Benchley is a quality writer. Her scenes make me feel I’m part of what’s going on, and she familiarizes the reader with the local culture, which so far is in England and Scotland. She’s consistent as the story unfolds; in other words, she keeps the story (and characters) straight, which is sometimes hard to do when writing a mystery.

Her books hold my attention yet they’re relaxing to read; they create interest in what’s going to happen but aren’t page-turners that keep me up until 3 AM reading (for which I am grateful). Grammar is excellent and the book is free of typos.

Excerpt: ‘Darkness, a black void…at first, that was all he knew. Isolated, he floated in a sea of nothing. How long? What? Where? Gradually, thoughts formed as the synapses of his brain began to fire. At last, a signal he was not alone. He could hear marching in the distance. The longer he listened, he came to believe it was not marching, but chanting — a never-ending mantra that waxed and waned, the words of which he could not make out, no matter how he tried. A steady, continuous chorus that would drive him mad. Enveloped in the dark, his very bones were permeated by a cold dampness. Bones, yes, he had bones and they ached. Searing intermittent pain became permanent and now raged throughout his body, bringing fire and a heat that was almost unbearable. He longed for the chill he felt when first aware of his being. A musty, charred smell drifted into his nostrils. If this was hell, he wanted out…’
With that opening in the first chapter, I was hooked on another wild ride of investigator, Duncan Dewar, the main protagonist of Author Victoria Benchley.

Page after page, Ms. Benchley laid the groundwork on another superbly researched mystery filled with informative historical background that kept me captivated. That is attributable to the excellent writing skills of a talented author.

Sit back and enjoy this mystery and see if you can guess the ending.

Please click HERE to find The Laird’s Labyrinth on Amazon.