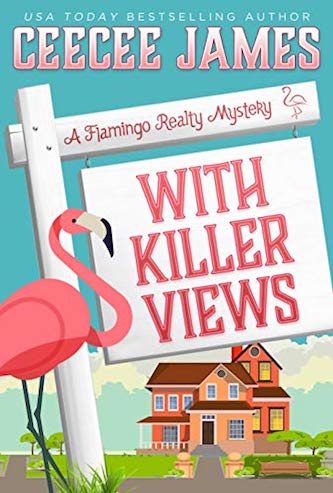 The setting is great, the mystery is intriguing, and the characters are really fun to travel with.

Stella O’Neil has found a treasure of a house to list… a house possibly full of treasure, that is. Her new listing belonged to a man who died from a seemingly innocent accident.

He also was embroiled in a bank investigation involving missing property and many enemies.

The rumors have gone wild and people will stop at nothing to search it out.

If keeping treasure hunters out of her listing and avoiding being killed wasn’t enough drama, Stella has finally found her mom and a way to rescue her.

With the rest of her family in place, and the neighbor and a hunky policeman friend to help, she’s determined to get her mom out. But someone is just as determined to stop her, even through murder.

Stella has come this far fighting to unite her family. She won’t stop until she’s finished. But will she regret it?

The best book yet in the Flamingo Realty Cozy Mystery series. I love, love the characters created by CeeCee James, and this book brings together two of her best — Stella and Georgie.

Stella has gotten a great listing for a new house…except the previous owner was mysterious killed, and there’s a ghost, and then there are a whole bunch of weird treasure hunters searching for the loot from a bank robbery.

The setting is great, the mystery is intriguing, and as I said, the characters are really fun to travel with. Highly recommend this book!

CeeCee James writes so many of my favorite series, but I think this one is my favorite. Maybe because I love anything flamingo:) Stella’s just trying to sell houses and make a living. Is that so hard?

If she could just keep from stumbling into murders, maybe life would settle down.

But, not this time.

The mysterious unsolved murder of her listing owner and a possible hidden treasure in the house stand in her way of a paycheck. As if life couldn’t get any more complicated, she is still determined to get her mom released from prison and clear her name of a crime she didn’t commit.

This is a fun read and a great addition to this series.

Stella O’Neill has a new listing, but it is not an ordinary home. The home was built on a hill and has a fantastic view. Unfortunately, the previous owner had a somewhat unsavory history, which could pose a few problems with selling the home.

The previous owner, Mr. Brown, was involved in a bank scandal regarding artifacts that were stolen from safety deposit boxes. Shortly thereafter, he became a recluse. His seclusion came to an abrupt end when he was killed.

There are actually two homes on the hill. Both were built by the same contractor and originally owned by the same family. The second home had been purchased by Charlotte Taylor a couple of years earlier.

When Stella conducts an Open House, there are a lot of people who seem to be searching the house, rather than actually looking at a prospective purchase. To add to the mystery, Charlotte insists she sees a ghost wandering around the hill at night and even has it on video.

What happened to the stolen artifacts?

Will Stella be able to unravel the mystery and sell the house?

Please click HERE to find With Killer Views on Amazon.