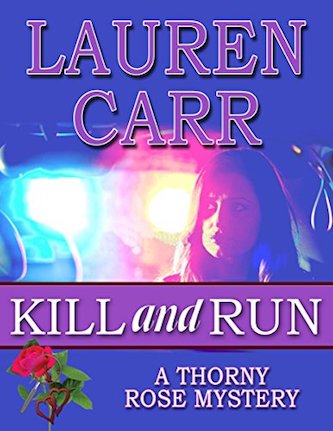 If you love a little mystery, with lots of action and a little romance this is the thriller for you.

Five women with seemingly nothing in common are found brutally murdered in a townhome outside Washington, DC. Among the many questions surrounding the massacre is what had brought these apparent strangers together only to be killed.

Taking on his first official murder case, Lieutenant Murphy Thornton, USN, believes that if he can uncover the thread connecting the victims, then he can find their murderer.

Before long, the case takes an unexpected turn when Murphy discovers that one of the victims has a connection to his stepmother, Homicide Detective Cameron Gates. One wintry night, over a dozen years before, her first husband, a Pennsylvania State trooper, had been run down while working a night shift on the turnpike.

In this first installment of the Thorny Rose Mysteries, the Lovers in Crime join newlyweds Lieutenant Murphy Thornton and Jessica Faraday to sift through a web of lies and cover-ups. Together, can the detectives of the Thorny Rose uncover the truth without falling victim to a cunning killer?

This is a book full of surprises that keep your attention as the author lays out the plot giving you a highly entertaining listen. I thought it was really well written that is fast-paced filled with action and mystery. I did guess who was pulling the cords a little over halfway through but I have been wrong before. I didn’t know the how or why until near the end. The author does a great job at keeping you entertained and guessing. This is a very fast-paced thrilling read that goes back for years and ties into Murphy wife’s first husbands killing that everyone thought was an accident. As you first start to listen you think oh what a sweet wonderful cop and listen in horror as the action unfolds. The author skips ahead a few years and the book takes off leaving you with your mouth hung open thinking oh my Lord a time or two. The author gives you a ton of surprises along the way with some shocks as well. You will find monsters and still more monsters controlling everything from women to a career with one person behind it all trying to take the world on to get what they feel they deserve. As the end comes you will be left with shocks and surprises that will leave you with your mouth hanging open.

The author gives you so many wonderful characters it is hard to pick my favorite. I would have to say my heart really went out to Cameron and Lizzy the most. Just wait until you meet Monica and the part she plays. Your heart may change on this little dear..that is all I can say. As the book takes off with 5 women dead and the why, who, and what keeps you in surprise you are pulled in and left on the edge as more people’s lives are at stake you are left wondering who will be left alive if any. I loved the plot and the characters. The mystery was outstanding as well as the thrills and holding your breath to see what happens next.

As the mystery builds and suspense takes over it was an audio I couldn’t put down. I found things to do around the home so I could listen longer. This is filled with action never a dull minute as the chilling mystery unfold leaving you wanting to get your hands on one person for all he put so many through. I had no trouble visualizing the scenes as they came to life for me leaving me at times in shock at how far one person would go and what they would do.

The title really fits this story it all started with a kill and run as the author takes you through the paces of one man and his career to get to the top. This book was really thought out giving the reader/listener a highly entertaining listen. I am so looking forward to more work from this author. If you love a little mystery, with lots of action and a little romance this is the thriller for you.

Up until this weekend of relaxing into two Lauren Carr books, I was considering Three Days to Forever my top favorite of Carr’s books, but Kill and Run sure is running close and I’m looking forward to seeing where this new series goes! Although Carr places all of her books primarily into the mystery genre, I’ve become intrigued to see her take off into complex, diverse stories that “tip over” into multi-genre categories that leaves me wondering if there is anybody out there producing the wealth of divergent and dissimilar areas of interests into which Carr is willing to travel…and achieve!

This book, for instance, I would compare to A. J. Tata’s Thriller Threat Series that takes readers into military action and adventure… While Tata’s strength is in his knowledge and experience in the military, Lauren Carr’s strength is in creating characters that can easily fall into whatever role she has assigned them. In this case, we meet Murphy Thornton… While Tata’s books are more technically involved, Carr’s Murphy Thornton is a man that readers can easily identify as being both prepared and suited for a special assignment to a team of Phantoms…

One of the bonuses you get from this author is a complete list of characters. Very much needed for Carr’s books since a number of her series are intertwined and characters from other series come into a new series to show the relationship. For instance, Murphy Thornton is the son of Joshua Thornton. You will remember him marrying Cameron, whose first husband was killed in what was thought to be a hit-and-run. It is in this book, in this new series, that the mystery about Cameron’s first husband is solved! And brings both Cameron and Joshua into working with Murphy and his new wife!

Murphy has been assigned as liaison between NCIS and the Navy. Being a member of the Phantoms is so secret that nobody in NCIS or the Navy are aware of Murphy’s additional assignment. In fact, Murphy is not quite sure why he was placed in what is, essentially, a desk job–not something he’s interested in as a career choice! He’s wondering if he is there to watch the head of NCIS…Because she sure needs to be! From the readers’s standpoint, I really loved the character that he hates…LOL She is created in such a way that you will hate her and be totally on Murphy’s side, especially when it becomes her fault that Murphy is assigned to a serial killer case!

Let’s just say that Murphy took over the case, just because he was there and wanted real action–as well as make his immediate supervisor upset! LOL What he didn’t know was that, before it was over, the case had a background starting years ago and a scope that became international! In fact, it got so complex that it finally became beyond his rank’s level to handle, even though he’d been doing the job. But the case was assigned to another man to whom Murphy would report…

Ok, telling you that it was to Captain Joshua Thornton (his father) doesn’t really give anything away except that this pulls together what I believe will be the new team in this series…Josh and his wife and Murphy and his wife, Jessica. I hope!

Izzy is a new character that comes into the story by way of the murder investigation. She immediately touches hearts and I was thankful that my prediction of what would happen to her proved to be correct… And then there was a scene that absolutely got me ROFL! It is a perfect example of how Carr brings in funny family furry friends and makes them so important within the books that we look forward to seeing what they will get into next! Yep! if it wasn’t for two of those furry friends, the primary villain might have gotten away! Kudos especially to Monique, a new furry…ah…”not” friend to everybody!

Moving from straight step-by-step research and clue gathering into thrilling action, together with that constant underlying sense of humor that only Lauren gives to all her stories, together with the move of setting into the military setting, certainly continues Carr’s exploration of range in her topics! In my mind, she has done an exceptional tour into the internal workings of a secret team called the Phantoms. Plus…Jessica got her PI license! Quite a pair to consider without a little help from family members! This series I predict will be one of her best! Congrats, Lauren Carr!

Please click HERE to find Kill and Run on Amazon.