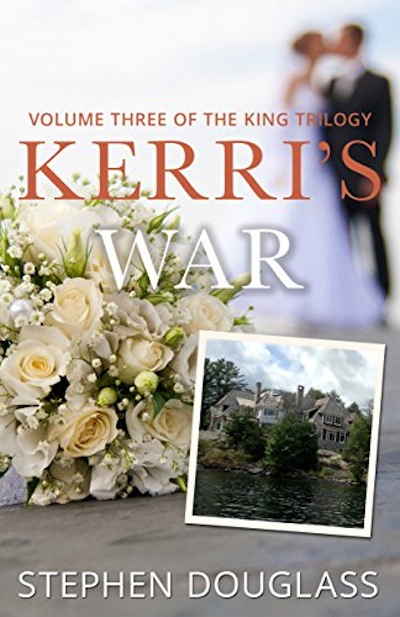 The story is compelling, extraordinary, finely honed, and sometimes even heartbreaking.

You are about to read the story of a thirty-three year old woman who chose to go to war with the greed and avarice of big business, the overwhelming power of the U.S. Internal Revenue Service, and a billion dollar shareholder lawsuit against her. Simultaneously, she chose to fall in love with a man who was engaged to marry another woman.

Kerri King’s dedication and tireless work ethic had taken her to the top. She was the president and CEO of Iacardi & Sons, one of the largest and most successful commodity trading companies in the world. Everything was perfect, until the company was nearly decimated by the terrorist attacks on September 11, 2001. Tormented by the loss of all but three of the company’s New York employees, and driven to provide a source of income for the families and loved ones of the Iacardi employees who died on that terrible day, she begins the fight to rebuild the company.

Virtually all of the cards and circumstances are stacked against her. The company is broke. Charles and Mario Iacardi, the company’s founders and financial providers, are dead. Peter Tavaris, Walter Deaks, and Billie Dukes, the three surviving New York employees, are vehemently opposed to Kerri’s continuing leadership.

Enerco, a gigantic Houston based energy trading company, conspires to purchase Iacardi & Sons, and employs every dirty trick in the corporate playbook to accomplish that objective. Desperate to salvage value for their Iacardi stock, the shareholders launch a billion dollar lawsuit against Kerri, and vote to have her removed as president.

In her quest to provide financial relief to the estates of deceased Iacardi employees, Kerri choses to give away to the Iacardi estates every cent of the fortune accruing from her father’s tainted trust. Her decision triggers disastrous consequences doled out by the Internal Revenue Service.

Kerri’s troubles are not confined to the corporate world. Just when she thinks she has at last found the love of her life, she is horrified to receive an invitation to his wedding in Naples, Florida, on New Years Eve, December 31, 2001. The wedding is like no other she, or any of the invitees, have ever attended.

Kerri’s War is the third book in the King Trilogy and another Stephen Douglass masterpiece! I didn’t want this Trilogy to end.

Kerri King is now the President and CEO of Iacardi and Sons. Due to her natural keenness and instinct for the trading in the commodity markets, she has become a legend on Wall Street.

Kerri’s War begins when the terrorist attack on September 11, 2011, hits the World Trade Center in New York, hitting the South Tower, in the spot where Iacardi and Sons New York offices are. The attack decimates the New York headquarters, killing 338 of the 342 employees. Only four survived. Three of them were in London at the time.

Peter Tavaris, Iacardi’s most senior trader, Walter Deaks, and Billie Dukes, watched the event unfold on CNN from their hotel room in London. Kerri Pryor was at home, in bed with a virus. She also watched, in shock as she realized that all of those people whom she had known and cared about were gone—their families left behind, with a dismal future. She also realized the impact the loss of the offices would have on the company.

Karri’s main concern is the plight of her employees’ family members. She desperately wants to give then financial security, to help ease their loss. She decides that she wants to rebuild the company as quickly as possible, and she begins that task immediately.

She also decides to divide the tainted money in the King’s Trust, into equal amounts and anonymously give it to each family affected. It would give them each a considerable amount, and it would disburse the ill-gotten money that had brought nothing but grief to her family. This generosity brings many complications into her life when the Feds find out about it.

When Ken Layton, president of Enerco, a gigantic energy trading company with headquarters in Houston, calls Peter Travis and says that he wants to buy Iacardi and Sons, promising to make him President, Travis is elated. He hates Kerri Pryor.

He firmly believes that he should have been given the position as President and CEO at Iacardi, but he had been overlooked once again. This was a way to oust Kerri as President, and become wealthy with the shares that he would have in Enerco. He vows to make the deal happen, even though he knows Kerri will not be receptive to it.

While Kerri fights to rebuild Iacardi, Peter Travis, and Ken Layton wage war against her. Underhanded tricks, murder, treachery, and betrayal frighten her, but Kerri is strong and determined. Even when she seems to be beaten, she does not bow.

Can Kerri reclaim her place in the Corporate world? Will she ever find love? Does she want either one?
Do not miss this stunning finale!

This is the third and last story of “The King Trilogy.” I’ve read the first two, which are excellent, but this one is the BEST! I loved it! In this last episode, Kerri King has become legendary on Wall Street. She is now the president and CEO of Iacardi and Sons, commodities brokers, with offices in the South Tower of the World Trade Center. She should be at work today, Tuesday, but she’s down with a severe case of influenza.

It’s September 11, 2001. Her life is spared, but her company is being ripped and torn apart as the building is struck by a huge hijacked Boeing 767, Flight 175. In London, Peter Tavaris, a senior trader for Iacardi postpones the conference so he can follow the news of the NYC disaster. He has frequently been passed over by Charles Iacardi for senior management positions and also as president in favor of Kerri King. He hates women, especially Kerri and has a vindictive core. Kerri’s dad, Mike King, and his wife Karen arrive home to Muskoka, Canada.

At 59 years old, he’s been successful with his XG Petroleum company by its growth into a national chain. He and Karen now have time to enjoy slowing down a bit since Golden National Oil has 50 percent interest in XG. They are aboard their 21-foot Donzi boat headed for Azimuth Island which his wife has inherited from her late parents.

The large three-lake area is the retreat area for the rich and famous to enjoy their multi-million dollar cottages. Kerri is devastated about the destruction of the South Tower in which of her 346 employees, only four have survived. She needs to talk to her dad about the 186 million dollars left from a settlement with the government over oil sales back in 1991. Miles Dennis, her mentor at Iacardi who has died in the attack, had moved that money to Switzerland as Mike didn’t want anything to do with it.

But now Miles is dead and the only people who know about that money is Mike, Karen, and Kerri who’s the sole owner of that account. Kerri wants to use that money to help the families of the Iacardi employees who had died on 9-11. But no one knows if that money is hot or cold, and there would be questions when that money came back into the United States. She wishes to give it all away, equally to each family, as an anonymous donor. Sounds like a plan? Yes, but someone is going to try to get Kerri tagged perhaps for tax evasion on those funds over the last ten years.

Would it be Tavaris who is contacted by an old classmate who wants to buy Iacardi, only in a stock exchange, no cash. Kerri holds only three percent of the stock, but Tavaris is adamant to seal this proposed deal, even if it means burying her in dirty laundry, or a grave. This is an easy to read story I could not put down. It’s compelling, extraordinary, finely honed, and sometimes even heartbreaking.

But I read it to the very end, and the last two words made me laugh out loud! There is nothing boring about this exemplary novel written by very talented Stephen Douglass. I hope he is working on another book to thrill me. Give it a shot, it will inspire you!

Please click HERE to purchase your copy of Kerri’s War from Amazon.