Daily Review: Justice for All by Olivia Hardin 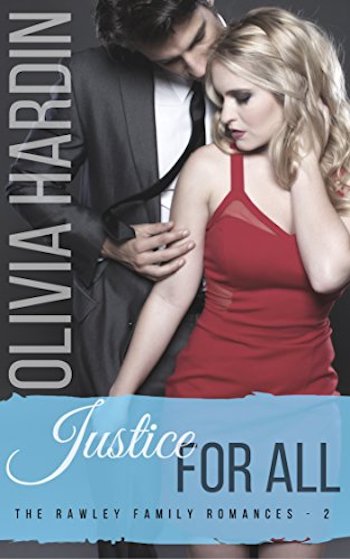 A lot of excitement and a lot of suspense that keeps you on edge.

Kay Rawley has plans. She might be the second child of an earl, but she wants to break away from her father’s estate in New Durma. Intending to build a life apart from her family’s name, becoming a lawyer was a bright, shiny object she just couldn’t resist grabbing. Her classes are complete, and all she has to do is pass the bar to turn her internship at a Dallas Law firm into permanent employment.

Kay’s been on Audrick Van Buren’s radar since the day she walked into his classroom two years ago. That admiration only grew when she came to work for his firm. But if there’s anything he recognizes, it’s a woman who’s driven–and Kay is definitely one. It’s all he can do to keep his distance and allow her the chance to come into her own.

What Van doesn’t know is that someone else is watching Kay, too, and if he doesn’t step between them, that person might not only derail her career but threaten her very life.

When I look for a suspense with romance I want it to be able to take me along with it that I forget all else. It also has to have the ability to do so virtually without me knowing it. Never having read this author before I did so like what it may contain inside. With plans and goals in place but with a secret in the background Kay was working her way in the law firm.

A surprise was to come in the form after a court session by Audrick with a chance to draw up a case involving abuse and a divorce that would also open the doors to more. Even though their first encounter was earlier a closed door that ironically starts it all they both are very much aware of each other. She also has a friend that most would not give as much loyalty to as she does but odd is their friendship to say the least with Thomas.

It will also spiral in a direction that she has no clue until too late. Obsession on his part is what I would call it especially if at times avoidance is needed. The best part though is the relationship that builds between Kay and Audrick a rock solid one that is the kind you love to read about. Add the suspense and danger this novel has the recipe for taking you down under and not coming to the top until you are done.

Hard to really explain this one it is just plain darn good reading. Her family is also very interesting that is woven in with all the rest of the good parts.

This book was different, it had a lot of excitement of suspense, keeps you on edge. Olivia Hardin did an awesome job with this book, I loved it from beginning to end. Kay Rawley is a strong willed person with her own plans and goals. She didn’t need her family money to maintain where she is at, she worked hard to be where she is at.

This story is one that once you start you will not be able to put down. I had a late start reading it, but as they say, save the best for last. So glad I did it was well worth the read and the time. You will see what I mean once you read this story full of great romance.

Some woman may relate to the story those in a bad marriage, and going through a divorce. It will make you mad, sad and happy in this book. It will bring emotions in you out, you will be shouting at the man she is going against to put in jail.

She is one tuff lawyer I would love to have on my side if I was going through what Charise Faucett was going through. I had a friend growing up who went through what she did. Was happy that Justice was done, she got her man behind bars and in the process found her man. One who will have to read about…