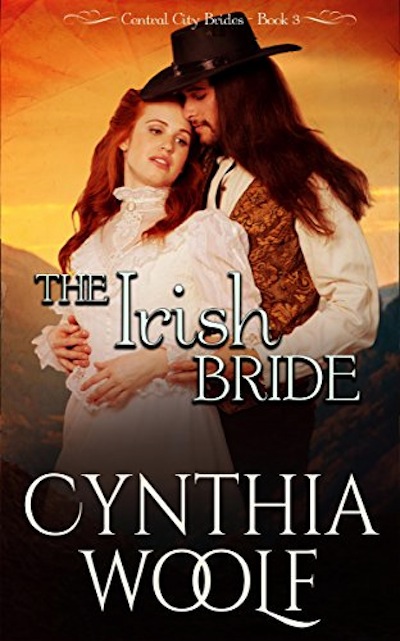 Henry falls for his feisty new bride, but he has secrets that could tear their marriage apart.

Erin O’Toole is no stranger to violence. Growing up surrounded by one of the most powerful gangs in New York, Erin learned how to survive. But when her little brother is killed in a gang war, Erin swears she’ll never be part of her father’s world.

Desperate to escape the pain of her loss and a future she doesn’t want, she risks everything to become a mail-order bride.

After years of being on the wrong side of justice, Henry Jacobs has made things right. Now he is a peaceful blacksmith in Central City in the Colorado Territory and all he wants is a wife and children of his own.

One look at Erin, and Henry falls for his feisty new bride. But Henry has secrets that could tear their marriage apart. When a man from Henry’s past threatens his new life, Henry finds he has no choice but to become a man she’ll hate in order to save the woman he loves.

Oh, my as much as I’ve enjoyed the other books in this series, I loved this one. Maybe because Erin is Irish and so am I.

Maybe because she was so very brave and determined to make her life without her father’s gang background.

Maybe even because Henry needed her strength, her gentleness and her feistiness. Did he learn to love his Irish Bride? What problems did Joe cause?

What surprise did Erin have for Henry? What was his for her?

Please get the book and read it for yourself, it is so good, exciting and emotional.

Cynthia Woolf is known for her romantic-western books on mail-order brides. The subject of mail-order brides is an interesting idea that was an integral part of bringing women into the west. Around the middle 1800s very few women lived would make good wives. I find this an interesting idea because it is so foreign from our lifestyle and, therefore, hard for us to understand.

This novel takes place in 1870. Twenty-four year old Erin travels into the Colorado Territory to marry Henry Jacobs, a blacksmith

Erin O’Toole is a very strong woman. This is a necessary trait for a mail-order bride because it is a difficult journey for a young woman. Alone, Erin makes an extremely long trip on a train. She, then, takes a stage coach for the rest of her journey. This trip takes several days and is extremely uncomfortable. She ends up in an unknown area to wed a man she does not know. And her marriage takes place before they even make it back to Henry’s home.

This book is a love story with a lot of romance and a little bit of love-making. The love-making is important to the plot because the author is highlighting the fact that the woman has no idea what to expect, and her new husband does everything he can to help her through her first time. I enjoyed this part very much because it is romantic and loving.

This novel, also, has a touch of intrigue. Henry has a secret from his past that he is keeping from Erin. This secret comes back to haunt Henry and causes problems in his new marriage.

I enjoyed this book, and I highly recommend it. Ms. Woolf is one of the few clean western authors who still write. Also, Ms. Woolf’s books are quick reads which are a nice change for in-between my longer books.

The Irish Bride by Cynthia Woolf is book three of her Central City Brides series. It is the story of
Henry Jacobs,the blacksmith in Central City, and Erin O’Toole from New City. Erin has a story that makes her become a mail-order bride.

As with Henry’s friends stories, it is not a smooth love story but has some adventure that includes a kidnapping, an old friend from a bad past history but love wins. Cynthia Woolf gives a glimpse in how gangs affected live from New York to the old West. The characters are well developed. The story keeps your interest. It also allows you to see what has happened in Henry’s friends and their wives’ lives since the last book.

It does well as a stand alone story so you do not have to read the other stories first but you will want to. I have read the previous books in the series and each pairing just seems so right by the end. The best part of the series which is showcases in this book is how the four men have stayed friends , like each other’s spouses except Robert, who is not married yet.

I am looking forward to his story as well. Cynthia Woolf has become one of my favorite authors. IF you like westerns, adventure and a little bit of mail-order bride romance, you will enjoy this book.