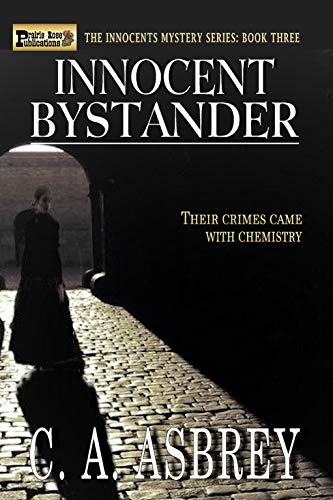 A solid and enjoyable story which employs nineteenth-century forensics, clever disguises, and romance.

Pinkerton Agent Abigail MacKay’s willful sister, Madeleine, is going to be the death of her yet. That is if Madeleine doesn’t get herself killed first! After running off to marry a widower whose wives mysteriously die—leaving behind a great deal of money each time—spoiled, beautiful Madeleine is unaware of the danger she’s in.

When Abi risks all to ride into the outlaws’ deadly hideout and ask for help, there’s no doubt she’ll get it—but nothing’s free in Ghost Canyon; here, everything has a price. With a new understanding in their relationship, Nat agrees to help her prove David Bartholemew is a cold-blooded killer before he can murder Maddie.

With Jake in charge of Madeleine’s welfare, all hell breaks loose when two competing reporters get involved in the case, along with an old nemesis of Nat’s coming into the mix. One thing is certain: David Bartholemew is a murderer. But how is he doing it? In a race against time, will Nat and Abi be able to figure it out before Jake runs out of ways to protect Maddie from her evil husband? Or will each of them become an INNOCENT BYSTANDER?

If this captivating series has to end, Innocent Bystander ensures that it will go out with a bang!

The author, CA Asbrey, truly knows her history and her forensics so very well. Truly fascinating! The reader is transported in time and becomes a part of the action- even if only from the safety and comfort of a favorite armchair.

Nat and Abi’s relationship is fraught with romantic tension – and add in the heart-pounding tension of multiple murders – and you have a page-turning, suspenseful mystery/romance.

Although this is a series, another positive about the way it’s written is that each one could be enjoyed as a stand-alone book. Don’t read just one, though, you don’t want to miss a single second of the buildup to a superb conclusion!

From the opening moments, when notorious outlaw Nat Quinn is so distracted by seeing someone he thinks is Pinkerton agent Abigail Mackay in the distance that he momentarily forgets he’s in the middle of robbing a train, readers can tell they’re in for a thoroughly enjoyable ride.

Abi’s spoiled younger sister has run off to marry a man whom Abi suspects of being a Bluebeard-style serial killer, and she turns to her on again, off again antagonists & allies, Nat Quinn and Jake Conroy just for some eyewitness information — and of course gets more than she bargained for.

Character development continues for all three, and we get a solid and enjoyable story which employs nineteenth-century forensics, clever disguises, and romance. It all ended too soon, but a review on Asbrey’s publisher’s blog tells us there’s more to come for the trio.

If you’re a fan of history, adventure, and detective mysteries this series is a must. My personal all-time favorite American Victorian era adventure is the life of Wyatt Earp. I’ve studied him since I was a kid. Read the books, court transcripts, and saw the movies (which many are tripe). I consider myself a serious amateur historian of Victorian-era history and the lawmen and outlaws of the era. And they weren’t just out west with the cowboys and Indians.

C.A. Asbrey has without question done her homework before writing her ‘Innocents’ series. She has masterfully weaved a series of fictional adventures with historical accuracy that would make one almost believe she had a time machine hidden away she used to spend time in that world.

Many of the historical and artifact references are so distant to us today, but commonplace for the day, they may escape many. However, she also takes the tack to educate us in the role women played in law enforcement even then. I must admit even with my own background in law enforcement and a student of history I learned even more from her novels.

I will attribute that mainly to the fact that part of history was buried until someone like Asbrey dug in and turned over stones to find it. I’m glad she did. There are women “lawmen” of the era deserving of the same recognition of their famously known male counterparts.

There is little question that Aubrey’s own law enforcement background along with these historical figures was the inspiration for her main character Abigail MacKay.

I am now the proud owner of the entire series and I know these books will most probably be read more than once. I sincerely recommend this series. You will not be bored or disappointed.