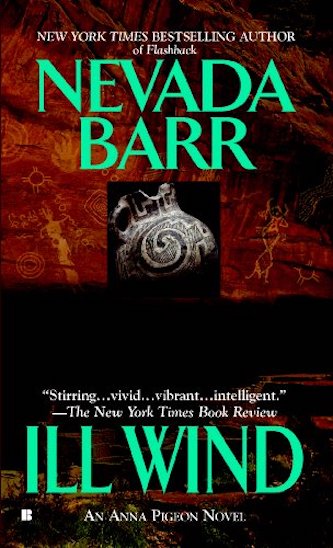 The perfect combination of characters, intrigue, and environmental conspiracy.

And once it strikes, park ranger Anna Pigeon must find the very human source of the evil wind.

The perfect combination of characters, intrigue, and environmental conspiracy. Anna is no maiden in distress, but not the typical Wonder Woman either. She’s flawed in a way that makes her believable and lovable. The storyline moves at a pace that holds your interest and keeps you guessing.

The clues are there and revealed as Anna discovers them. The descriptions of the park are nothing less than magic. Beautifully written and delightfully told. A rare environmental degradation story that doesn’t leave you depressed and desperate for vengeance.

The setting is Mesa Verde National Park. The murder of a ranger in a sacred kiva brings the FBI to the park. Ranger Anna Pigeon is assigned to work with the FBI agent.

In addition to murder, there’s a lot more going on in the park. Anna is constantly taking emergency calls.

A woman staff member is being stalked by her ex-husband. An intruder has been spotted in the locked maintenance yard. Staff members are seeing weird iridescent manifestations at night. Oddest of all, medical evacuations have quadrupled at Cliff Palace this season. Tourists are dying way more than usual in the high-altitude Anasazi ruins.

Anna has lots of opportunities to be heroic in this book. She also suffers a lot. Her drinking is out of control. It’s driving her crazy to live in a noisy dorm. She misses her dead husband and her cat. At this point in the series, I know Anna pretty well, and I empathize with all her troubles and feel proud of her triumphs.

This is a series that grows on you with every book.

Anna Pigeon, a park ranger at Colorado’s Mesa Verde National Park, is a woman on the mend. She’s a widow, she’s battling alcohol dependence, and she’s recently changed jobs. Despite her pain, she reaches tentatively toward Stacey Meyer, a ranger trainee who has also endured his share of middle-aged pain.

Shortly after he mishandles a crisis that results in a child’s death, Stacey himself is found dead. Suicide? Anna thinks it unlikely. Murder? Possibly, but who and why? When the husband of another park employee is killed in a suspicious car wreck, the case takes on broader implications.

Through it all, Anna struggles with her middle-aged angst, her alcoholism, and her loneliness, drawing support from long-distance calls to her sister, who serves the functions of both a Dr. Watson and a voice on the other end of a crisis hot-line.

This third entry in the acclaimed series is as much a personal journey of self-discovery as it is a mystery. Anna is a flawed but admirable woman struggling daily to determine her values and her value in a harsh world.