Daily Review: I’d Rather Be Growing Grape by Jan Romes 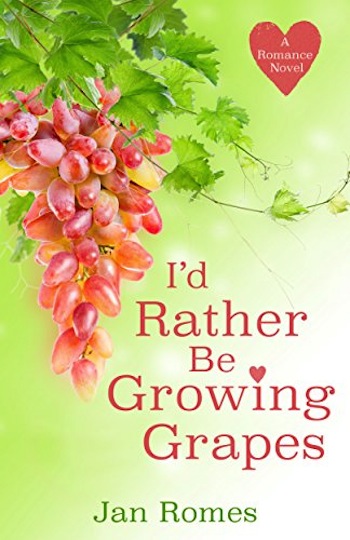 A romantic novel packed with wit, humor, and charm.

Sabrina Kerrigan is a sassy, independent woman whose fiancé ditched her a week before they were to be married. Since then, she gives all her attention to a backyard filled with flowers and a spindly grape arbor.

Her meddling twin, Lilith, thinks Sabrina’s had enough time to grieve the relationship that wasn’t meant to be. Lil registers her to be one of twenty-one bachelorettes who will vie for one guy’s heart in an event called Pick Me. Sabrina is furious at Lil for immersing her in what is sure to be three weeks of nonstop chaos.

The only reason she agreed to take part is because the entry fee goes to charity. The minute Sabrina arrives at the hotel a case of mistaken identity sets the chaos in motion.

Millionaire winery owner, Beau Reinholt has had the worst luck with women. He seems to pick those interested in his money not him. His best friend, Marco Santaguida, the director for Pick Me, cons Beau into being this year’s bachelor.

Beau agrees on one condition – the women aren’t to know his true identity until he either falls in love or finds extreme-like with one of the candidates. Everything goes smoothly until he meets Sabrina Kerrigan. She ticks him off right away. She also turns him on. The more Beau tries to focus on the twenty other women the more he’s drawn to the one who says she doesn’t want any part of him.

Can two wounded people tune out the noise going on around them to listen to their hearts?

Sabrina Kerrigan’s twin sister, Lilith, decides to take it upon herself to find her a mate. So she signs her up for a local fundraiser based on The Bachelor called Pick Me. Sassy Sabrina wants nothing to do with it, but when she finds out how much money her sister paid for the event, she agrees. Her hope is to hide in the background and be one of the first women to leave.

Enter bachelor Beau Reinholt. Sexy, handsome, and oh, so delicious. Even when Sabrina fights with him, she can’t help but find herself falling for him. But Beau, who was also conned into doing this gig, only wants to get through the three weeks and get out of there.

He doesn’t believe he’ll find his soul mate among the twenty-one women who paid to be there. But as the days go by, he begins to find his thoughts are constantly on Sabrina. Can he really find true love amidst all the chaos?

I’d Rather Be Growing Grapes is packed with wit, humor, and charm. Jan puts together a wonderful cast of characters that fills this story with all kinds of crazy scenarios so you don’t want to put the book down. I thoroughly enjoyed this novel and I’m sure anyone who loves a good romantic comedy will love it too.

Thank you, Jan, for another entertaining novel! Can’t wait for the next one.

Should Sabrina and Beau attend to their sentiments even with all the commotion closing in on them as well as dealing with their wounded hearts? Sabrina says she doesn’t want anything to do with Beau, a tycoon, vineyard proprietor, and the year’s eligible bachelor on a show called “Pick Me.”

Well-to-do Beau, has his choice of any contestant—eligible beautiful women—challenging for his heart, however the more Sabrina rejects him the more he is drawn to her. While she annoys him, she attracts him at the same time. Sabrina never wanted to be a contender on ‘Pick Me’ but her meddlesome, twin sister thought it would do her good to get over her heartbreak of her past, spoiled relationship.

Want to find out what’s going to transpire between high-spirited Sabrina and the very wealthy Beau? Then make sure you pick up I’d Rather Be Growing Grapes, one of the many delightful, romantic comedies by the very talented author Jan Romes.

At times you’ll be shaking your head and others, smiling and laughing at this fun, entertaining read.

Please click HERE to find I’d Rather Be Growing Grapes on Amazon.