Daily Review: On the Hunt for the Wizard King by Michelle Miles 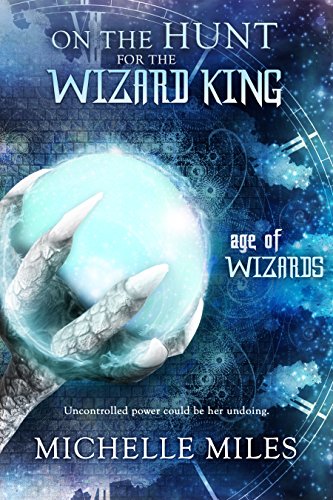 In the Age of Wizards, uncontrolled power could be her undoing…and an ancient prophecy is destined to come true.

Her magic is untouched.

When Sunnie Burke rushes home after the unexpected death of her father, she is determined to find the truth. Instead, she discovers her mother has disappeared and her father may not be dead after all. An old family friend, Caleb O’Brien, offers to help her solve the mystery but he is not what he seems. He evades her questions leading Sunnie to suspect he’s hiding something. Desperate to lose him, she returns to her childhood home and discovers a portal in an antique steamer trunk leading her to the mystical realm of Faery…and an enchanted staff that unleashes the untapped magic inside her.

His magic is corrupt.

Caleb O’Brien has watched Sunnie Burke grow into adulthood and make a name for herself in Hollywood. But when the beautiful starlet returns home determined to find the truth about her parents, he’s desperate to keep her from the portal leading into Faery. Sunnie’s untapped Fae magic surfaces with wildness she cannot control, and when her sudden sifting leads her right to the portal in the trunk, Caleb has no choice but to follow her. He quickly discovers he can’t protect her from the dark magic in the enchanted staff, no more than he can control his own dark magic swirling inside him forcing him to face his cryptic past.

Now in the land of Fae, the two are at the mercy of a cruel sorceress whose malevolent machinations threaten the lives of the only people Sunnie ever truly loved—her family. The longer her dark magic consumes her, the more it puts all their lives in peril and the more Sunnie’s true self-dissolves. An ancient prophecy holds the key—only one person can break the spell and release her. Caleb is determined to find that person…even if it means sacrificing everything Sunnie holds dear.

This is the second book in the Age of Wizards series and follows where In The Tower of the Wizard King left off (it ended on a cliffhanger). This is the story of Sunnie, a character I really didn’t like in the first book, but loved in this one. Her character was well rounded and interesting.

She becomes possessed by an evil sorceress and it’s up to Caleb (a potential love interest, who’s hiding secrets of his own) to save her. The timelines of the first book intermingle with this one but it’s still easy to follow if you haven’t read the first book (although I’d suggest reading it).

All the plot lines join in an exciting ending that had me flipping pages to find out what happened. I’d highly recommend this book.

Michelle Miles’ second Age of Wizards book, On the Hunt for the Wizard King, doesn’t disappoint! I said this about the first book, In the Tower of the Wizard King: “Michelle Miles has spun a great high fantasy tale that includes betrayal, love, magic, and loss. This story has all of the makings for a great series.”

Boy was I right! In many ways, I think Miles topped her self in On the Hunt for the Wizard King. In some ways, her characters were even more complex. Miles created a world that was easy for her to move between timelines and characters, without creating confusion with her audience.

We’ve already met the cast of characters, Sunnie, Caleb, Cian, Aoife, Sean, Niall, Liam, Fiona and many more. There’s a couple of new faces that play a major role in On the Hunt, but its learning more about the characters you’ve already met that really makes this story special. Sunnie isn’t really what you think she is. There’s more to her than what we were presented in the first book.

I think that’s what I really loved about this book. We really got to watch all of the characters grow and change throughout the book. No one was what you expected. Miles did a great job of keeping you guess and wondering what was around the next corner.

I don’t want to give anything away, so you’re going to have to pick up the next installment of Age of Wizards to find out if the prophecy will be fulfilled or not!

Please click HERE to find On the Hunt for the Wizard King on Amazon.