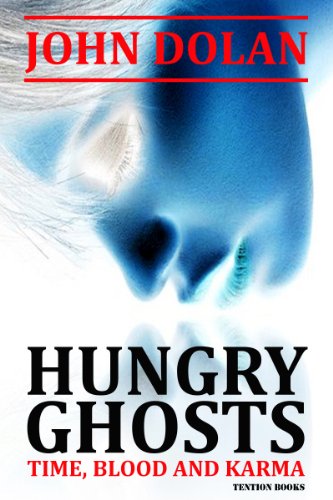 A psychopathic gangster is seeking revenge for the death of his brother and won’t stop at anything until everyone involved is dead.

For the last half-hour, my mind has been playing games with me. I keep thinking I see Claire at the periphery of my vision, but when I turn my head she vanishes.
But then, of course, she would.
She is a ghost, after all.

It is the spring of 2005, and the macabre ‘burning murders’ have ended. Life has apparently returned to normal for the Thai island of Samui.

For Police Chief Charoenkul it means resuming his seemingly-endless wait for that elusive promotion to Bangkok.
However, the peace is destined to be short-lived. Unbeknown to both men karmic storm clouds are gathering and murderous forces are about to be unleashed which could destroy them both …

Hungry Ghosts is the second volume in the ‘Time, Blood and Karma’ series. It marks the welcome return of David Braddock, the charismatic anti-hero from Everyone Burns.

I just finished Hungry Ghosts, the second (or the third chronologically) book in the series “Time, Blood and Karma” and absolutely loved it! This book is even more gripping than Everyone Burns and really keeps you on edge as the story develops.

A psychopathic gangster is seeking revenge for the death of his brother and won’t stop at anything until everyone involved is dead. Too bad for the private detective David Braddock, who is one of the people involved.

Add to this a family secret that reveals some very unexpected facts about David’s father, a former priest looking for his sister who was a mule for one of Thailand’s crime families and mysterious letters saying “I know you killed your wife,” and you get a perfect thriller that indeed should be made into a movie.

For me, a series that is one of my guilty pleasures. The sexual stuff sort of makes me uncomfortable at times, tho thankfully it is generally brief and not as descriptive as it might be since it is really more about the characters, humor, and intrigue that draw me to these books.

Author both makes me laugh with passages like “I doubt his surname starts with a ‘J’. Now the name ‘Phil Anus’, that would be more appropriate” and then flips the switch having me in deep thought with passages like “There are things I would never want my child to know about me. To let in the sunlight on magic is not always palatable; particularly where the magic is stained black.”

All of the characters I’ve come to know from book 1 are back in this offering (tho some not permanently) and glad I grabbed the next in the series already as in all likelihood I’ll enjoy that in equal measure. Terrific book and I can’t help but recommend to others.