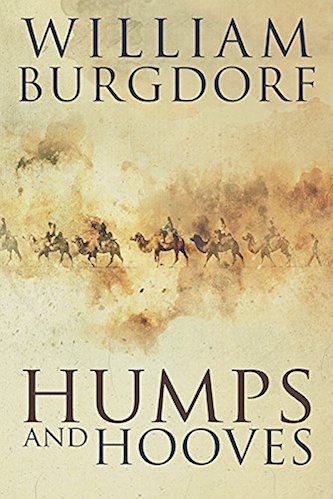 William Burgdorf has taken a little-known historical event and turned it into a wild, rollicking, and heart-pounding novel.

“Corporal, you are standing at a moment in history,” replies the Major breaking into a smile. “The beginnings of this experiment can revolutionize the movement of supplies and communications across the Southwest.”

“Well, Sir. What might that be?” asks Sam. He flicks a quick questioning look at Billy.

“Camels, Corporal. Camels.” The hack stops in front of the tavern and the Major exits, walks inside, and leaves both Billy and Sam sitting and staring at each other.

Into the pages of Texas history walk thirty-four Dromedary and Bactrian camels for the U.S. Army Quartermaster Corps, and Corporals William Roberts and Samuel Adams are dispatched to escort them from Indianola to Camp Verde, Texas.

What they aren’t prepared for is a lovely German emigrant, Comanche and Apache Indians in West Texas, camel caravans across Northern Arizona, the approaching Civil War, or a maniacal, stalking French murderer.

Billy sums up their camel experience in the last line of the book. You know, Sam, did have it right. These critters ain’t nothing but humps and hooves.

The American West had many fascinating stories that did not survive the passing of years. It was a frontier, and men ventured into a great unknown, never quite knowing what lay beyond the next range of mountains or where they would find water, or if the harsh country ahead of them even possessed water.

William Burgdorf has taken one of those little-known historical events and turned it into a wild, rollicking, and heart-pounding novel: Humps and Hooves. Settlers were headed West and traveling across an unfriendly landscape, searching for a place to call home. Standing in their way were Indian raiding parties, Native Americans who did not want to lose the lands of their fathers.

The U. S. Army sent its horse soldiers to clear the way.

But the distances were great.

They sometimes had to travel for miles, for days, before they found water.

Not all of them survived.

For man and beast alike it was a test of tenacity, courage, and fortitude.

What was the answer?

It seemed they could go forever on a single drink of water. In the late 1850s, the army began its camel experiment, bringing dromedaries from the Greece, Turkey, and Egypt and using them as pack animals as they marched across the Southwest from Texas to California.

What the camel caravan wasn’t prepared for were a lovely German emigrant, Comanche and Apache Indians in West Texas, the approaching Civil War, or a maniacal, stalking French murderer.

William Burgdorf is a serious historian, but he doesn’t bog his western novel down in history. His writing style is light and lively, and he allows the soldiers to tell their own story: their fistfights, their gunfights, their stubborn determination to defeat the odds regardless of the cost, their growing respect for the beasts of burden they once hated, and their loves. Humps and Hooves is a tale of perseverance, endurance, and high adventure.

You never envisioned the Old West this way before. It’s time you did.

Please click HERE to find Humps and Hooves on Amazon.